So today has been horrid to say the least an it is not even lunch time yet which also means that apparently it is too early to start drinking. Unless of course you have a drinking problem, which as tempting as it sounds at times I don't.

Actually if the truth were to be told the horrible morning didn't really start this morning it was a continuation of the bad mood we all went to bed in.  Yes yes I know you should never take upsets to bed but sometimes it just can't be helped.

Really it wasn't just last night that was the problem either.  There has been a slow gathering of lots of little things all building up like the awful weather that surrounds us at the moment.  The whole change of season thing is a bit tough at this time of year.

After the heavy rains at the start of the year and the record breaking dry season that followed I am quietly expecting a horrendously hot and sticky build up. Oh joy of joys.

As a long term local I am aware of the perils that come with October.  In fact I am sure that is why mental health awareness week is found in October. The weather just sends everyone crazy, which makes understanding mental illness rather easy.

I wrote that on my newly acquired iphone 3 while at basketball this morning.  Yep iphone 3 not 4s or whatever the latest rage is.  I am more than impressed to say but the least.  Seriously you can not begin to imagine just how cool I felt this morning typing that out, letter by letter on the teeny tiny screen with the even teenier and tinery little buttons.  I was only doing it when DD1 wasn't playing though so I wasn't one of those totally obsessed iPhone users that drives me up the wall.

Anyway where was I now?

I am having trouble keeping up, Kenny is playing in the back ground and right now at this very moment in time all seems right with the world.  The troubles that I was trying to share here earlier have all been and gone.  They were worse than expected but some how bearable with the end result being no serious damage was done and life will continue on as per planned.

I could do a whole post on the awesomeness of Kenny and Johnny and the joy they bring to me.  Seriously as soon as I start listening to them I fee any worries I a may have been carrying quickly drift off. 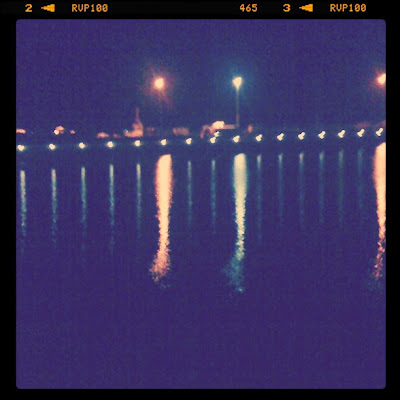 Of course an awesome evening sharing a bottle of wine and some awesome pizza over looking this view with a wonderful friend also helped me forget of the earlier troubles of the day.  Without being too picky on the actual day I would imagine it be a good 18 months since I last ate a meal without there being a child to steal share it with.