After trying, but not quite achieving, a little post every day challenge for the month of January I entered February feeling somewhat drained. And by somewhat drained I mean pretty darn exhausted. Though the ridiculous weather and my sudden desire to exercise may also play some part in the feeling of exhaustion that currently plagues my body.

Or perhaps the return to school and all that comes with it has been my downfall and it is that which has left me void of all energy for blogging?

More than likely a combination of both and about a thousand other things that have not quite gone to plan in recent times. But then when does anything really ever go to plan?

As the second week of school draws to a close it, the holidays already feel like a distant memory. The prospect of the Easter break is still too far away to really look forward to. And so the drag of life continues.

I don't want it to be a drag, really I don't but the mundane of it all this mothering sometimes is just too much to bear.

How do you not make doing the same thing day in and day out a drag?

Sure I can spice things up with a trip to the park here and an outing there but in between all of that there are still mountains of washing waiting ever so patiently to be washed, folded and put away. Just like the never ending cycle of dishes. Always needing to be done. 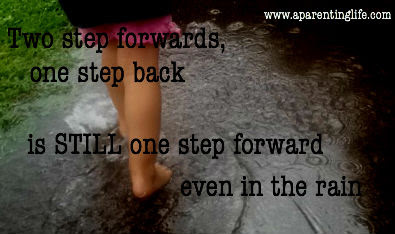 I saw the above quote floating around the traps in the last week. Naturally I can't remember where and rather than spend all night looking for it I thought it easier to just whip one up myself. I need to embed this into my brain.

A reminder that I am actually making progress, regardless of how small it might be.

Joining in with Grace for some Friday blog flogging fun