For some reason there is the general expectation that Bloggers are all over Pinterest. Not just in the way they spend hours pouring over pins but also in their ability to create pinnable things.

Personally I have tried to stay away from the dangers of Pinterest (though I naturally have an account there if you are interested). I am easily distracted and my box of distractions is always overflowing. I most certainly do not need a Pinterest addiction to deal with.

Of course my ability (or perhaps lack there of) to recreate the images generally found on the likes of Pinterest may also have something to do with my aversion to spending too much time there.

There have of course been a few exceptions. Well one really, my infamous Pigs in Mud Cake. I still get all tingly when I think about how awesome that little beauty turned out. Well worth the effort I must say, though I am not sure I am in a rush to go to that much effort again.

Thankfully though I recently discovered a new little party winner that, is dead easy and will leave you with a totally pinworthy creation all of your own.

Drum roll please as I proudly present my 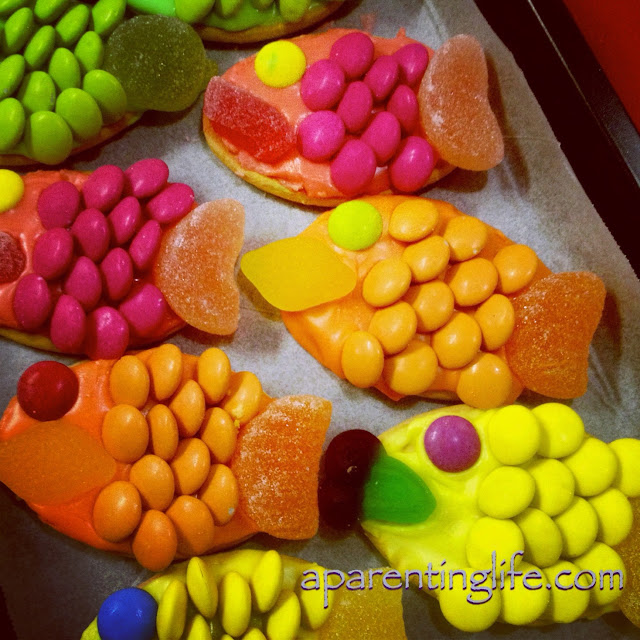 The most enjoyable and easy to make biscuits delights I have ever come across. These little fish were not only fun to make but pretty tasty too boot!

So where did I come across this brilliant party idea?

While Essentially Jess and I were checking out the super cool entries in this year's Royal Darwin Show. We went along early on the opening day so as to avoid crowds and take advantage of reduced gate entry. Since we were only taking the littlest children so they could see the animals (read so that Jess and I could get our yearly show fix) it all worked quite well.
Sadly though the downside to the opening day early entry prices is that not all of the judging is completed and some displays don't have up all their information. Hence why crediting the creator of the inspirational fish is easier said than done. Massive kudos to whoever you are though.

So as I stood there taking my very dodgy photo with my once lovely camera that now only seems to take a decent shot in broad daylight, I mumbled to Jess something about hoping to remember these next time I needed to make cupcakes. Since my kids have all had their birthday this year I could imagine when I would get the chance to try my hand at these.

"Bring on Monday for Ava's birthday, she says with a smile, "then you can blog about it for IBOT and get lots of pins"

Brilliance if ever I saw it!

Little did Jess know, was that even if she hadn't have given me this totally viable excuse, I probably would have made them any way I was so crazily keen.

Now I know I haven't made exactly the same as the photo and that is purely because despite having the joys of modern technology I don't always have the sense to use them. Even though I took the photo I didn't think to look at it until after I had been shopping for supplies.

At which point I of course realised I didn't have any jelly beans or black things (which I suspect might be licorice) for eyes. I temporarily fleeted with the notion of running back to the shops. They are after all literally only five hundred meters down the road. But then I decided I would somehow make do amongst the five packets of lollies I came home with. Not to mention what I may already have had at home.

Anyways as simple as these decorated fish biscuits may be I still have a few tips to share for when you create your own.

Tips for making your own totally pinworthy decorated fish biscuits

* Set yourself up before you start. I found having the smarties and sweets sorted into colours made creating the fish much easier.

*Make up one big batch of white icing. Add the various colours as you need them.

*To make the icing mix 2 cups of icing mixture with 2 tablespoons of milk. The easiest way to get rid of lumps is use an electric mixer. 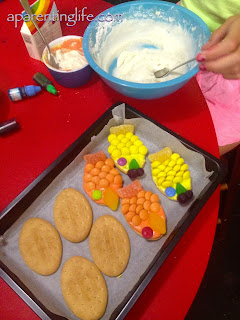 *Make the lightest colours first. In our case we started with yellow icing, which we then turned to orange by adding a drop of red. After orange we added more red to get a pinkish of sorts kinda colour. After this we were out of icing and started again with blue, then green and finally purple.

*I found it best to do the eye and mouth, then the tail and fill the gap up with smarties. It could be just me but I never seemed to leave enough room if I left the mouth or tail till last.

*In case you want to use the same as me I had milk arrowroot biscuits, smarties, fruit flavoured soft jubes (tails) and starburst fruit jellies (mouth). Mind you I think the jelly beans in the orginal may actually be the way to go.

*You don't have to keep the colours all matchy matchy if you don't want to. Though just between you and me if you are going for the whole pinworthy thing then colour matching is a must, as demonstrated below.

So what about it, are you a pinner? Did you pin me?
Can you recreate pins with the simplest of ease?
Do you like fish biscuits?
Have you joined in the fun of IBOT like I did?