Time to sleep, per chance to dream? 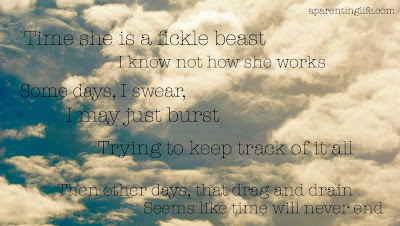 It's funny how even within the same week so much can both change and stay the same. While last week saw me hoping today would be the day that the heavens graced us with rain. Today sees me sitting here enjoying a gentle breeze that is chilled with scent of fresh rain. A coolness floats through the air soothing all that it touches.

Tomorrow of course will see the swelter return but at least for now all is cool and well with the world. Or at least it would be if I still wasn't battling with a twelve year old to go to sleep. At just past 10pm I might add.

I think back all those years to when she was so much younger than today. When I would put her in her cot some nights and she would scream. And scream. And then scream some more.

Did she really know there was only so much I could take? Which by the way was not very much. I saw no point in sending a child to sleep screaming. How are sweet dreams made of screams?

In fairness though it is not every night. Just more than I would like.
I am sure it is her way of wielding power. Or trying to at least.

This child has a way of challenging me unlike nothing I have ever known.

I don't want to fight and argue with her. Lord knows no parent wants to live like that. But still she must learn to follow the rules. Part of life, is, after all, living by the rules.

As hard at times as that may be. And some times it is most certainly harder than others.

Joining in the fun that is IBOT

PS Did you know that on a Friday you can come here and join in  the easiest linky ever?
Things I Know with Rhianna