Merry Christmas to one and all 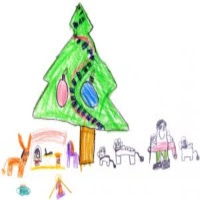 Another Christmas has just about passed. Soon the New Year will be here and time to start again. It never ceases to amaze how so much anticipation is built into the event and then in a not much more than a heartbeat it has been and gone.

What I don't love though is the way that sometimes it becomes all about the presents and doing what is perceived as the right thing. The question always beckons of course what is the right thing? Naturally it varies between individuals.

For some Christmas is all about giving. Giving the biggest and best present. Better than the year before and better than what anyone else will give. There are some that give just for the sake of giving. It is selfless, they ask for nothing in return. They are few and far between though. Even the majority of those that give to charities are doing so because they get the reward of feeling better about themselves.

Anyway this was not intended to be cynical look at the festive season as I really had a magical day. It was however also very long and perhaps it is tired eyes that are giving me a jaded perspective.

So as an exciting game of Guitar Hero World Tour is calling my name I wish you all the very best for the festive season. May it be full of Fairy Wishes and Butterfly Kisses.
No comments:

Email ThisBlogThis!Share to TwitterShare to FacebookShare to Pinterest
Labels: 2008 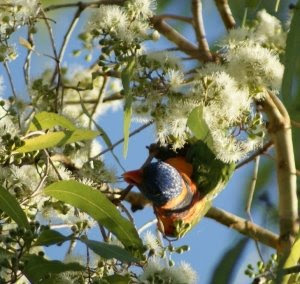 This is a red collared lorikeet. They can often been seen around where I live and are often confused with the rainbow lorrikeet. It is only upon close inspection that it is possible to notice the difference between the two. The colours are similar yet different.

For me though the easiest way to know that this is a collared rather than a rainbow is that rainbow lorikeets do not live in the wild where I live.

As I write this post the date is actually 31st January. I have decided to update my blog and post all drafts. Apart from the photo and title this post was blank. I have no idea exactly what I planned to say when I first started this post well over a month, maybe even two, but since it was such a pretty photo I thought it should stay
No comments:

Things to be done

Well it has been 4 days since I last sat to write. In my defense I think that every NaNoWriMo participant was entitled to at least 48 hours with out thinking about word counts, story lines and undeveloped characters. Unfortunately at the end of this time not only I but my youngest child and husband were struck by a terrible flu that kept us inactive for nearly 3 days.

Even the thought of raising my throbbing head from the comfort of my pillow was enough to bring tears to my eyes. Thankfully I am feeling somewhat more human now hence my brief flurry of activity. This is my second post in less than hour! (I could not find an appropriate segue to join the two)

So here is list of things I need to get done
In between all of that I have decided to give myself some new daily writing targets. Since daily doesn't work so well for me I have broken it weekly.
These should be attainable goals which I should be able to increase once production levels are well established.
No comments:

Well I survived NaNoWriMo and achieved a 50,300 word count. Which is not a bad effort I guess. However given that probably half of it will be cut and thrown into the electronic rubbish bin I still have a lot of work in front of me. (Sighs)

Back to the positive side of life though.
Writing every day (well nearly every day) was a fantastic feeling and without being too modest I think there were some incredibly moving parts. I managed to astound even myself on occasion. Naturally I realise there are some parts which need to be... shall we just say... tweaked a little more and I am fairly excited about the process.

I was talking to someone last weekend about what I had achieved. She noted how I seemed so passionate about what I was doing. I must say there could even have been a glint of jealousy in her eye. After she works long hours in the corporate banking industry so she spends most of her time worrying about other peoples money. Not exactly my idea of fun, but each to their own I guess.

For a brief moment while conversing with her I got a glimpse of what it could be like to be living the dream. Being a writer has always been my dream. During November I really was being a writer. Now I just need to keep it up! (easier said than done)
No comments: