Something I am sure many of us struggle with.  I know I do.  However it is a part of life and is something that needs to regularly be done.  Of course more often than not in my house it is easier said than done.
The lack of interest in housework in my house is not limited to just myself.  Quite understandably the girls are not exactly the most tidiest of people.  I say quite understandably because children learn best by example.  As much as I would love the girls to not follow the drop and release technique once they no longer have a use for an item, I don't really expect this ability to just magically develop.  It needs to be nurtured and gently grown.
The best way for this to occur is for me to stay atop of everything.  Not exactly an easy task for a housework challenged person such as myself but it must be done.
In a bid to create some motivation towards housework I have decided to try and enforce a new personal rule.  After my husband and children my next most favourite thing in the house would be my lovely Mac (which other Mac owners, computer geeks and Internet junkies would understand), as such I have decided that I will only allow myself computer privileges if all the housework is done (or at least under control, I doubt it will ever really ALL be done).
So far though not much has gone according to plan... 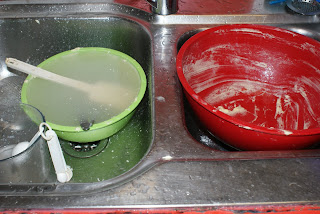 That is the current state of my kitchen sink.  Actually when you look at the benches and the total amount of dishes that need doing it is much worse than this picture portrays.  My absence here though could no longer be over looked I honestly felt that if I didn't get a couple of posts out I would explode.  Though neither of them have actually turned out they way I thought they would when I started.  Not that that is anything new.
I really wanted to talk a little about what the posts of this submission thing might look like.  I would dearly love a 'real' blogging job.  It would be like a dream come true.  Getting money for rambling about all the fun I have been having... (deep sigh if only)
Have you voted?