Everywhere I turn at the moment I seem to see people who are busily sharing how awesome they intend to be for the new year. There are all kinds of whiz bang promises and hopes flying all around. From eating no chocolate, to exercise more, to be kinder to oneself and others around, and everything in between.

It seems there is no denying that with the New Year comes resolution time.

Naturally this is a bandwagon that I tend to jump on as well. Especially in recent years. As a blogger I almost have an obligation to publicly share what I will successfully not do this year.

Back in 2011 I dubbed it the year of trying. This saw me try new things that caused me to try and step outside my comfort zone. I tried making new friends and being more social. I tried writing more and I when I thought about it, I tried to be the best person I could be. All very admirable I know but if I am honest I am not sure I tried as hard as I could. I rarely seem to, which was kinda why I thought I should dedicate a whole year to it.

Turns out last year was the year to make it matter. I say turns out because on Wednesday when I wrote about this time last year I was unable to find anything that remotely resembled my resolutions for the coming year. Which I found more than a bit strange.

As much as I may fail with the whole resolution commitment thing, I do generally give it at least some thought each year. I was sure that I had written somewhere in the new year of 2012 what wonderful things I envisioned for the year ahead. Only I couldn't seem to find it. The best I could come up with was a reflection on the discoveries of 2011.

Scratching my head I decided there was no point going over it any further as I still had this year to figure out.

Which naturally I still haven't done.

This post was supposed to help me nut out some fine resolutions, ones that I had little to no chance to fail at. I just don't see the sense in setting myself up for failure. I am quite good at not getting things done as it is, without adding any extras in.

In the process of trying to spit this post though all I have done is furrow my brow as my fingers struggle to type anything that seems to actually make sense.


In case you hadn't already picked up on it I am not the commitment type. To anything. Except for Mr Awesome, the kids and a couple of nasty habits I would not rather admit to publicly just yet. Actually speaking of Mr Awesome and commitment. The Australia day weekend will mark ten years since we first went on that magical date which saw us cement our undying love for each other.

Just thinking about it makes my heart swell and beat a little faster. Even after an entire decade of being in each others arms I can believe it is all real. Every day I am thankful for being blessed with his love and the ability to love him back. Even in the deepest darkness I can still see his light and know that all will be alright.

At this stage all I have got is this 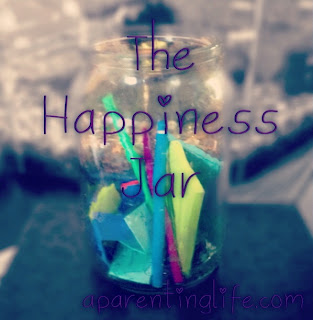 Each night we all write out what was the happiest part of our day and pop it in the jar. I am sure you have seen plenty of others pledging to do the same. Such a brilliant yet simple idea.

Rather than keep it all to myself it is something I have shared with the whole family. I had wanted us to have our own jars but everyone else thought it best if we just share. Which is good really because the five jars did take up a bit of room which our little shoebox of a home just doesn't have.

So it has been a truly beautiful experience. I love the way that Miss Six has embraced it so warmly and delights in writing it out herself. Though she has put her own twist on it and wants it to be about what she wants to remember most from each day. Which is kind of nice as well.

Do you actually have any or are you like me
and just winging it for now?

Flogging my blogging with Grace and the crew over at  withsomegrace.com