One of he places I like to hang out is over at The Sporty Mummy. Health and fitness are just two of the things that I am going to matter this year. Regularly reading about other active people is just one of the ways I stay motivated.


Last week when I was catching up on my blog reading I noticed that on a weekend Nicole hosts an active kids link up. Last week we were not active due the holiday thing but this week was a different story.

The return of school also means a return to sporting activities. This year hubs and I have decided that we are all going to play hockey. Well obviously the littlest won't but for everyone else hockey it is. Unfortunately though the season is still quite a few weeks from kick off. As it is an outside sport it doesn't start till the weather is dry and cooler.

At nearly eleven we feel that it is important that Miss L have a sport to keep her occupied.  One that lasts for as much of the year as possible and one that is not affected by weather.  Hello basketball.  There are two seasons a year and it is held indoors, win and win.  Plus there is a coffee shop at the stadium.

She has played for a few years now and without being to biased she shows a little bit of talent. Actually she seems to be one of those gifted people who is blessed with some sort of natural sporting ability for all manner of sports.

Last year was her first season of hockey, which also meant no basketball for the first half of the year. The year before last basketball became a bit of a chore at times. She loved the games but thought that training was over rated. Which bought about many an argument.

Now I know that some may disagree with our stance but she had actually asked to not play basketball that year and we made her.  The friend that she joined the club with had moved away and while she knew people there she can be very shy and timid at times.  Her ability had been noticed by others and it seemed a waste to be walking away after only one year.  Hubs and I made an executive decision that sports were to be played for a minimum of two years.

We figured that the first year was all about finding your feet and learning the game.  As well as making friends and finding a place in the team.  The second year was the year for all of this to be expanded on as skills developed.  Not only that but kitting a child out for a sports team is not a cheap exercise.  At least by playing for two years there was double the value out of the uniform. 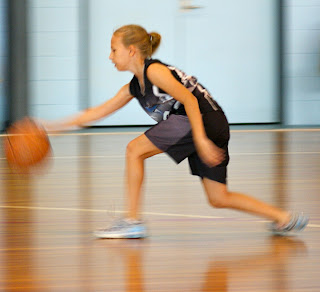 Apart from the resistance to train she had a great time.  The discipline from training and the benefits of being on a team continued to outweigh the grumbles.  At the end of the year though she said she still did not want to play the following year.  She wanted to try something else.  As well as having a you must play for two years rule we also have a you can only play one sport at a time rule.

I tried reasoning with her that she was good at basketball and who knew where it might take her in the future.  She returned with I could be even better at something else and we'll never know because you didn't let me try.  Hard to top that one.  So she took six months off basket ball and turned her hand at hockey.

It took her a while to get a feel for the game.  Which is only to be expected really.  However by the end of the season you could see a huge improvement.  She even managed to score a few goals and was asked to play up a grade when they were short.  Once again training was an issue though.  And she started to say how much she missed basketball.

When we realised how early in the year the hockey season ended we left facing endless weekends with nothing to do.  Thankfully though basketball is a some what popular sport here and played all year long.  Well pretty much.  This meant Miss L was able to play most of the second season, without ever complaining about training.  To top things off she was even awarded the Most Improved Player at the awards ceremony I never went to.  Yep mother of the year here but that is a post for another day!