Yesterday on APL's Facebook page I alluded that 2012 was the year of the super organised and as such I would have some scheduled posts for my forthcoming holiday. As the awesome blogger that I am, I feel I have a certain responsibility to my avid readers and therefore could not fathom the thought of leaving you hanging for nearly two weeks while I go and check out the latest addition to the clan.

Only the so called scheduled posts aren't exactly done yet. Which I am pretty sure doesn't surprise many of you. Of course there is still time as we haven't exactly left yet but that time is quickly being occupied with stupid things like packing and cleaning the house. Apparently leaving the house resembling a bomb site is not the done thing when your little sister in law is coming to house sit.

On top of all the cleaning, reorganising and decluttering that has been going on within these four walls I have also had to ensure that holiday fun has been available for Miss Z. In her mind ripping everything out of every cupboard only to put half it back in is not exactly her idea of fun (who would of thought?)

So with only two days to go before we leave on our plane ride there is still much to be done. Everywhere. I had planned on getting at least a few posts out the way last night, but opted for sitting on the couch with a movie and some basket weaving. The new plan was to get up early and write while the kids were sleeping and biscuits were baking. Only the kids were up before me and the thought of baking was no where near as appealing this morning as it was last night.

As much as I love writing and feel better when I have done so I wasn't going to bother this morning. Even though it is Thursday, and even though Thankful Thursdays are some of my favourite posts I still wasn't going to bother. After all I will be hard pressed to make the time to read all the other participants so missing one week would be ok.

While I was drinking my morning coffee, (which takes place here incase you were wondering) 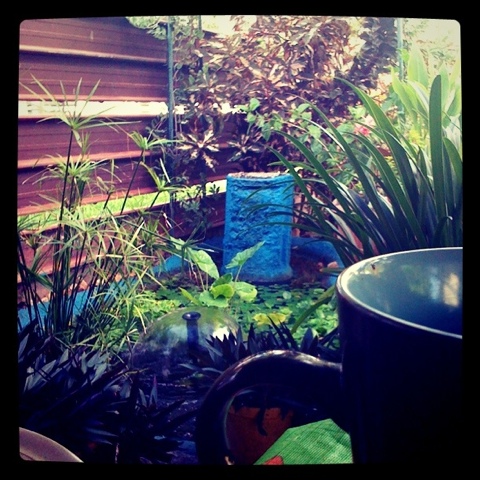 I was also checking in on Twitter to see what I had missed since last I was there.  That was when I came across Kate's tweet for her TT post.  Which I went and read.  You can too.

you should head on over and check them out.