From paradise to snapped cables

Moving day. Today we leave paradise as we know it and return to Broome. Which is, in it’s own way, still a type of paradise. It just involves a lot more people. The solitude of Cape Leveque is one of the aspects I love most about it. Though I imagine in the height of peak season there is not nearly as much solitude.

With all the beauty and tranquility of staying at Koolijaman for the last four days I had completely and utterly forgotten about the road we would need to take to get back to Broome.

It is still horrendous. Perhaps even worse. Though now because Mr A knows it he goes a little faster. This both terrifies and pleases me. Pleases because it means we will get off it faster and terrifies me because sandy narrow road full of dips and potholes. Sometimes I hate being a passenger. At least as a driver I am the one in control.

In the end I decide that having a little nap is probably in my best interest. It is easier to block out what is going on and gives me a chance to talk to the fairies and ask for their protection. As much as I know the worrying is all pointless I can’t help it. Mr A is an experienced driver and knows how to handle Patty and Edna and the roads and deep down I do have faith and trust in his ability but still I worry.

Looking on the bright side of it all though it gives me a great chance to work on some visualisation techniques.

Eventually we leave the road to hell and return to the civilisation of solid roads. The harrowing road has taken it’s toll on all of us though and we are all super grumpy and irritated.

Since we had such a lovely time at the Roebuck Bay Caravan Park last time we were in Broome we decided to head back there. As we approach though there is a line up of vans and motorhomes waiting to check in.

Thankfully there was plenty of room still available and we were able to secure the same wonderful location as what we had the other week. All is starting to feel right again with the world, though the children are in a particularly dire way and complaining of dying of starvation. I start to lecture them on what it would really feel like to be in such a predicament and explain that really they are just hungry but decide I don’t really have the energy.

We set about unhitching Edna and getting ready to unpack. Only everyone is too busy complaining and grumbling to concentrate properly and suddenly there is an almighty snapping sound in one of the corners.

Mr A stops winding up Edna’s top and we both head to the corner where the sound came from. It turns out that on of the roof clips was not undone and we have now snapped on of the cables which means the roof will not go up. 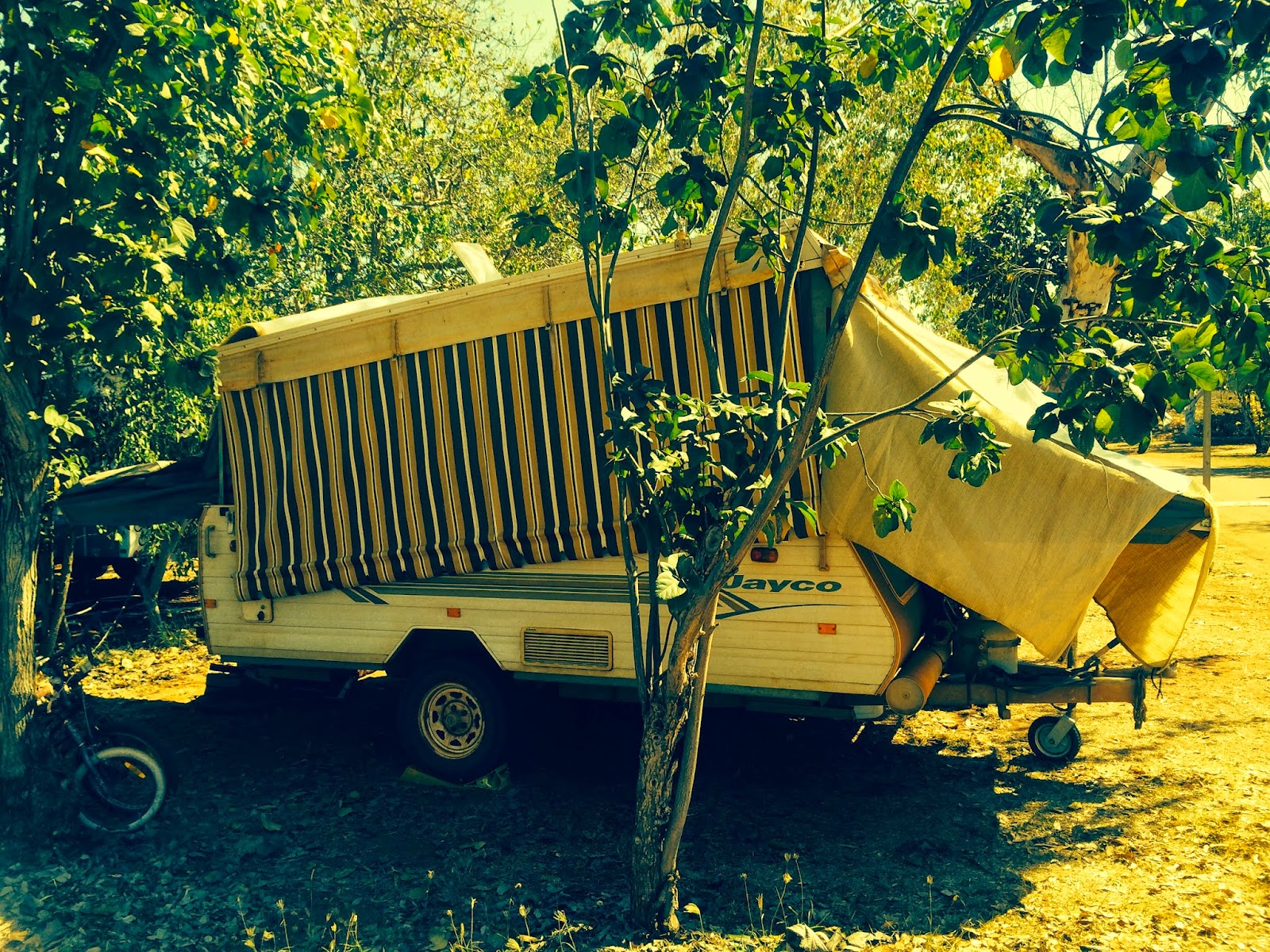 I walk down to reception to get the name and number of the caravan repairer. All the while trying to lay any blame or get worked up. These things happen. After fifty two days on the road it is only to be expected that something go wrong somewhere and if this is it then so be it. There are so many worse things that could have happened to us.

The caravan repair man doesn’t answer his phone and we walk around scratching our heads not sure of what to do. Our neighbour, who arrived at about the same time starts to make small talk about how we are.

Turns out that he was once a mechanic and pops on over to have a look at our predicament. In an instant he offers a suggestion on how it could be fixed and before we know it Mr A and I are able to see things a little differently and all hope is no longer lost.

We plugged the fridge in and head straight for Bunnings to get some little u-bolt thing that will be able to re-join the snapped cable. I drop Mr A back at the van and take the girls to get some golden arches while he fixes it all.

While I am out and about I manage to find a car wash and hose of the salt and sand from Cape Leveque and refuel the car. By the time we return Edna’s roof is up and most of the unpacking is done and all seems right with the world once again.