Without a doubt the first thing that I know this week is that I can not believe the end of the year is already upon us.  It feels like only yesterday I was sitting here planning for 2011 to be the year my life came into fruition.  Or rather The Year of Trying.

I know  that on many different levels I can honestly say I tried this year.  Well I tried more than I have in previous years and at the end of the day that is all that really matters.  I know that as long as you try harder than last time and are prepared to try even harder next time, in the end you will succeed.  It is just a matter of sticking out to the end.

I know that when I look back at the post for January they seem a bit disjointed.  That is because (as I finally remembered, after much head scratching) that it was back in January that I actually started APL and sometime in the year I stupidly merged a heap of old posts from an old blog or two.  If I recall it was all about numbers and for some reason I wanted to appear as if I had lots of posts.  Ironically I am currently thinking of reinstating an old project (blog) called My Fairy Garden...

I know that when I went to read through the highlights from February I was a little disappointed.  Partly because there were only six posts to read and partly because of the spelling error I came across in the second paragraph.  It is interesting to look back though.

I know that I think it is incredibly cool to have somehow written 23 posts in the month of March.  it just so happens that March is my birth month and 23 the day :) (feel free to write in diary and send card)

I know that in terms of blogging April was a great month.  Really great.  Or at least in my eyes it was.  I thought that I was so great I applied for a mummy blogging position.  I know now that really I was way to inexperienced at the time to attract the market needed.  I know that at the the time I took it pretty badly.  This can be seen in the sudden decline of posts in June and July.  Well that and the fact it is a very busy time of year here.  Perfect weather for outback adventures

I know  that May didn't really deserve to be skipped over just then.  After all twas in May I managed to post for eight days straight. I know, go me right?

I know that August is the month that holds the total for the most posts all year.  That's right 31 wonderfully written entries.  One for each day.  Only I am pretty sure that some actually came out on the one day, not that it really matters.  If I had to pick a favourite though it would probably be this WW post.  Without tooting my own horn they really are awesome photos.

I know that if it wasn't for the likes of Wordless Wednesday, Thankful Thursday and Things I Know Friday, the months of September, and October would have been pretty bleak in terms of posts.  I know that I am very thankful for such kind hosts as it is only because of joining in with such linkys that I have any sort of a readership.


I know that Christmas can be a great topic to blog about.  Thanks to Christmas November and December had a few great posts in them.  I know however that I didn't really take full advantage of the blogging possibilities of the festive season.  Maybe next year?

I know that I really enjoyed looking back over all these old posts.
I know that putting in all those links was a bit of a pain.  Please go and read them.  Or at least one or two of them.
I know that I really wanted to include something about Me & YOU but couldn't work out how to fit it in.  I know  that next year Me & YOU is going to play a pivotal role in my life.


And the final things I know for 2011 are that I have loved having come along for the ride that is my life.  I hope that you will all join me for bigger and better things in 2012, which I believe may be known as the Year to Make it Matter.  Or something like that.  I am still working on the details so stay tuned.


I know there is something great round the corner if I just keep trying.


I also know that TIK is over at 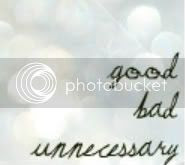 with Kellie.
You should drop over and see what others know as well.


Ok I promise this is it.  I know lots of others do this so I am going to give it a go and Flog My Blog