Each Day Is A New Beginning

That is what I tell myself on a very regular basis.  Part of me thinks on a too regular basis, but then another part of me says that is a good thing.  After all it is a true and important reminder.  Each day is a new beginning.  A chance to start again.  To Learn from the mistakes of yesterday.  To once again put your best foot forward and head towards what it is you are after.

So why would I worry that I tell myself on a too regular basis that each day is a new beginning?  How could I possible feel that starting each day with a fresh ray of hope is not the best thought to adopt?

You see if I have had to tell myself not to worry about something and I can just try again another time, well then that means I have made a mistake.  Something has gone pear shaped and I am no longer heading in the right direction.  While it is lovely (I guess) to have the optimistic outlook of there is always another chance the cold hard reality of all is that eventually the time will come when there are no more chances.  There is not always a second round and more often than not no redraws.  So while each day is a new beginning, it may not necessarily be one that comes with all the opportunity that today may hold.

Last week I came up with 8 things I wanted to do.  Even as I was writing the list I wondered how much of it was feasible.  There was one that I just knew wouldn't happen but I wanted to include it anyway.  I had hoped that this would push me into action.  It didn't really.  However I have been thinking very hard about it all week long and it is something I really want to do so I guess there is still hope I may one day end up with some crochet stars.

There was one that I knew was somewhat out of my control so including it was like a silent little wish.  Yep I am talking about the sleep one in particular here.  Oh and the not being sick.  There was a slight improvement in the sleep department but not nearly enough.  I can't help but wonder when a mother would ever truly get enough sleep though.  For the most part everyone's health has greatly improved though there is a tiny bit still lurking around.  Thankfully though not enough to be bothersome.

The baking simply did not happen.  At all.  Martha Stewart I certainly am not.  Well I did make two of the biggest batches of gingerbread you have ever seen.  Unfortunately though they did not successfully transform into magnificent houses that Hansel and Gretel would be proud to call home.  Turns out that making gingerbread houses in less than a 24 hour period is near on impossible.  Especially with the high levels of humidity currently found here.  Unless of course you are a smarty pants and have one of these 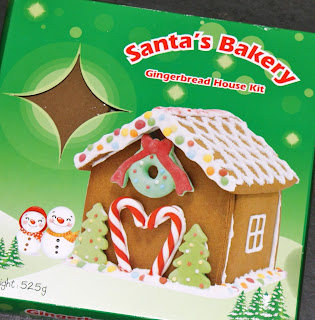 Which of course I didn't know about until after I needed it.  Apparently for under $10 it is possible to purchase a cheats house with most of the hard work already done.  All the non Martha Stewart types such as myself need to do is some simple construction and decoration with everything needed included.  Hopefully I can let you know next week how it went.

My biggest nemesis the housework, is probably slightly in the lead this week. Mt Washmore is actually under control, just in time for the wet weather that is apparently heading in this direction.  Even the folding is not too overwhelming.  As for the dishes...they have been worse but I am not sure if they could really be considered under control.

The scheduled posts I spoke of were a bit hit and miss.  I did get two scheduled ones out I think and then two more on top of that so not a bad effort but not something a problogger would be doing.  I am also pretty sure that a problogger doesn't lose their card reader cord which is needed to transfer the not so awesome photos taken of their very awesome Christmas decorations.  Said cord has now been located though so I guess perhaps I can try again.

Negative Nancy has no place here.  I will not beat myself up on what I could have done better or different.  I did what I did and that is that.  Tomorrow after all is a new day.

You see the real goal of last week was


to be the best me I could be

or rather just to make sure I tried.  And I honestly feel that I can say I did try.  Sure I had a few major failures (think soft stodgy gingerbread that never stood a chance of being a house) but there were some great gains and even a few successes.

I managed to create a lovely new button for my blog
I did get out a few rather awesome posts (even if I do say so myself) In fact my Thankful Thursday post about breastfeeding may actually lead to another post as I realised there was still so much more I want to share.
I did have a few moments where my voiced was slightly raised to the point that some may call a yell but there were also many many moments where I caught myself in time and took a different approach.

Last week the best me was supposed to do little bits here and there as they needed doing.  I think little is the operative word here.  I still need to work on this somewhat.  The best me was also supposed to be organised.  I must say I wonder if I even truly understand the meaning of the word.  The best me was also meant to be planning yet remaining flexible, which with hindsight I can't help be question whether that statement is in fact an oxymoron.

So what's for this week?

Well the theme of being the best me I can be is something that is going to hang around for a while.  It is something that I really want to instill in the girls and what better way to do that than to lead by example.

Wednesday will be a particularly difficult day for me and the lead up to it will also involve quite a bit of stress.  As such it will also call for the biggest helping of understanding I can muster.  I will spare you the details now but chances are pretty good a post will pop up in the week.  Speaking of posts I am unveiling my first review tomorrow and it even comes with a give away.  Which is more than a little exciting I can tell you.

There are a few Christmas craft projects that I still need to get out the way.  Particularly as they are required as gifts for others.  So clearly this is one of my priorities for the week.  As is this

What about you?  Have you got something you want to work on? Please join in.  Head over to The Mother Experiment to see how you can become part of Me & YOU