Thankful Thursday - The last for the year

If I was the super organised person that I sometimes dream of being my thankful post for this week would actually have been written last Friday.  Come to think of it if I was that person lots of things would go differently in life.  But alas I am not, I am me, in all my disorganised glory.

So what could possibly have happened late last week for me to already know what I am thankful for this week?

Well in a nutshell I made a monumental mistake.  Though when I shared the error of my ways on Twitter I actually used the f word.  I know.  I couldn't believe I did it either.  While I may swear like a trooper with the best of them at times in the real world, I shudder at using such language when writing.  Someone once said to me that those who use foul language do so because they lack the eloquence to express themselves any other way.   Now while I can see there is a time and a place for everything for me swearing should be saved for special occasions (so to speak) and for me rarely will the written word (in any form) include swearing.

Moving right along now though as this has little to nothing to do with being thankful other than showing just how upset I was last week when I made my mistake.  I still haven't actually posted how I did what I did but I did briefly touch on it when I shared what knew about cars on Friday.

So on Friday as I stood around watching a long time family friend of my father's fix the error of my ways, 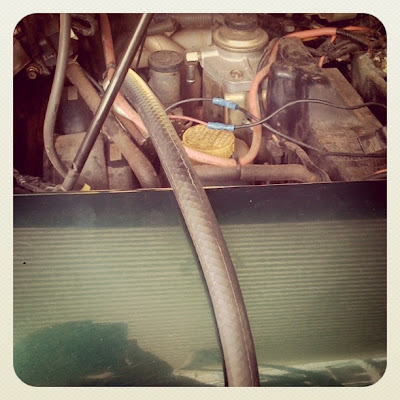 I mentally wrote today's post.  After all I had so much to be thankful for.  I was thankful I realised my stupidity before I started the car.  I was thankful that there was a lovely man behind me waiting for my bowser so he was able to help me push it.  I was even thankful that other people had done the same (apparently three in the last 24 hours according to the console operator).  For a brief moment I was even glad my father was not around to see what I had done.  (Mind you as I type this now I would give anything to have him here).  I was thankful for the help given as well as the fact no one had broken into my car while it was left at the service station overnight.  When it all happened I was also thankful for the nearby pub to wait at.  And finally I was thankful that by some grace of God I actually had a spare or rather available cash to cover the costs of my stupidity.

I was certain that it would be one of the best thankful posts I had ever written.  The best part was I would have it written well in advance.  For which I would be super thankful for come today.

Only the post never got written.  In all the excitement that was Christmas, Christmas Eve and the eve of Christmas Eve I just never managed to squeeze it in.  I was too busy enjoy this wonderful time with my precious family.  For that I am beyond thankful for.  Even though this Christmas was spent with as many family members as I would have liked I still had a lovely time.

Yesterday hubs returned to work and the girls and I set out on being active.  Rather than wait for the new year to start I am trying to get cracking on things I want to change now.  I still had planned to write a thankful post about the car incident, though when I realised (thanks to Kate's tweet) that this would be the last TT for the year I wanted to make it a bit special.  I had thought a recap of my TT posts would perhaps be fitting.  There have after all been some awesome ones.  Only my active levels during the day were slightly excessive and saw me in bed and fast asleep at an unusually early hour.  I was very thankful for that this morning though when I woke up feeling fresher than a daisy.

So here we are, half way through Thursday and still waiting to hit the publish button.  There really is so much that I want to give thanks for that I don't really know where to begin.  I am super thankful though that all those months ago I came across the wonderful blog that is Kate Says Stuff.  Taking time out each week to think of what it is I am most thankful for is a wonderful idea.  I am also thankful for Alicia who has a 365 Moments of Gratitude Project which she shares on FB.  Not only is she one of the few people to ever click like on APL's FB page but she has helped me (mostly unknowingly) gain a wonderful perspective on many aspects of life that I have struggled with at times.  Reading her updates on what she finds to be thankful for each and every day is a great way to remind myself just how much I too have to be thankful for.

Now as a rule I am not one for long posts, and that applies to both writing and reading.  As much as I love to ramble I know something different is only a click away for those with a short attention span.  Which means this post should be coming to an end.

If you are still reading then for that I am thankful.  In fact even if you only skim read half of it I am still thankful.  Actually just for stopping by regardless of how long that may be for I am thankful for.

How about you?  What are thankful for this week or even this year?

Make sure you drop by Kate's and see what everyone else is thankful for today.