Sounds rather impressive doesn't it?  Almost sounds like I might be eluding to writing one hundred posts in five days.  After all it really only equates to twenty posts per day.  Which is technically doable as there are twenty four hours in a day and generally speaking I can get a post up in less than an hour.  Actually in an ideal world I could get a top quality post out in around twenty minutes.  Which means I could knock twenty posts out in around 7 hours.  I could what!!  Clearly that is not anywhere near a reality I know.
The reality I know though says that this is my fifth consecutive day of writing!  So well done me and on top of that this is my one hundredth post on APL. I am rather chuffed by the fact that the two just happened to coincide.  Adding to my extreme happiness is that I have recently had a few rather nice little comments from various readers.  Naturally I love getting beautiful compliments but I also just love to know that people have taken their time to stop by and have a read.  I know how busy and hectic life can get.  Which makes time ever so precious.
My precious time today was spent creating these 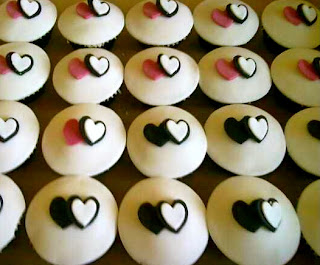 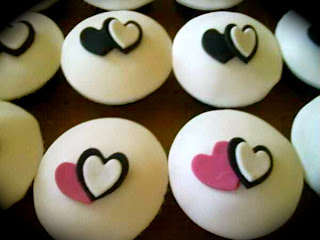 Actually...truth be told I only created the love hearts.  The rest (as in the main part, the actual yummy cup cake) was made by the my dear friend over at House of Cupcake  Let me tell you I had THE best fun ever helping her make these.  We did some other pretty awesome stuff as well but I don't have photos.  Dummy here, was so excited about have some total child free time, that I to take my camera,  The ones above we taken on my phone.  Which apparently can take a rather nice shot.!

Since lunchtime yesterday I have been aware of the fact that my next post would in fact be my muchly anticipated hundredth post.  I have spent this entire time thinking about how this post would go.  This is not even close to what I originally had in mind.  My original idea.  Which I actually started writing, on paper no less, at my mum's yesterday while I waited for her deliveries to arrive.  Why was I waiting for her deliveries I hear you ask?  Because she was off having a rather laregish lump from her back.  My mother though is a whole post in itself though and not one I am sure I want to write now so let's keep moving right along.

This wonderful hand written post was a list of 100 Things That Make Me Happy.  I never made it to one hundred.  In fact I didn't even get close.  I think I got to twenty.  I say I think because I don't actually know where this piece of paper is now.  Maybe in the car, maybe at my mum's, all I know is, it is not sitting here at my desk right this very instant.

So for now my 100 Happy Post can wait.  It will however be added to the To Do List.

Thanks once again for stopping by, may lots of fairy wishes and butterfly kisses come your way