Once again I have decided to play along with Sunny + Scout and Point and Shoot.  This weekend for us was pretty much a stay at home kind of weekend.  Hubs had to work for a while on Saturday and Miss L went shopping with the neighbours for a while but apart from that we all pretty much just stayed at home which I just loved.  I knew that I had a big week coming up so I wanted to take the chance to just chill and enjoy the girls while I could. 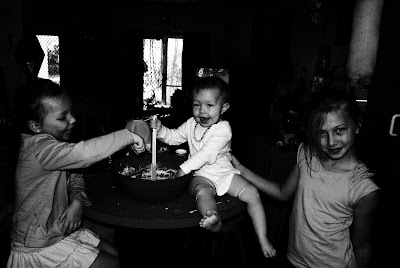 In between my endless efforts to get on top of the housework we took time out to make pancakes.  This was DD3's first time helping in the kitchen.  Miss L and DD2 thought that it was rather amusing to teach her how to taste test.  To them cooking is more about tasting than actually cooking.
The photo which I love (for obvious reasons) is in black and white to hide some of the mess and clutter that we were meant to be getting rid of.
Wanting to try something new and exciting we tried to make double chocolate pancakes.  They sorta turned out ok.  Sorta.  Unfortunately the original mixture was much nicer but there was not nearly enough of it, compared to the abundance of the awful chocolate ones.  In a desperate attempt to make the chocolate pancake disasters more appealing I turned them into this 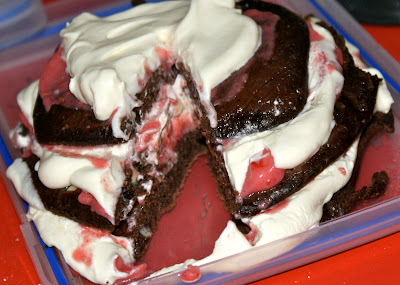 Just in case you were wondering it is layers of double chocolate pancakes (they have white choc chips in them) with a delish raspberry butter and whipped cream.  Served with a drizzle of chocolate sauce.  Yum.  It actually tasted a lot better than this photo would suggest.  Well if a sickly sweet kinda I just want lots of sugar kind of way.