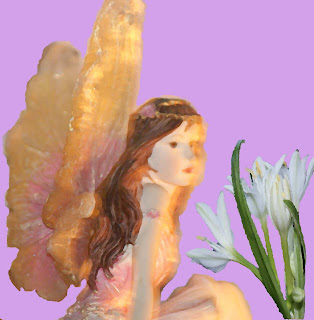 Those that know me well know that I have a love of fairies.  There is a part of me that knows they exist but because I have not been blessed to see them yet there is a part of my brain that refuses to truly acknowledge it.  I live in hope that one day this will all change and I will have the confidence, faith and knowledge to openly walk around saying that fairies are as real as you and me.  Until then I will just continue to wait for them to reveal themselves.

Anyway a few years ago I read a book written by Doreen Virtue. It was the first book I had read since I don't know when.  As much as I love reading it seems to be something I rarely make time to do.  The main reason for that is because I tend to get so engrossed in the fictional world I tend to forget there is a real one I need to be part of.  Not exactly great when you are a mother.  So the fact that I was in a library looking for a book and then actually managed to read said book was pretty amazing.  In fact it was so amazing (well at least to me) that I thought perhaps it was a message from the fairies.  Perhaps the long awaited sign was finally being shown.

For around six months or so I think it would have been fair to say that I became fairy obsessed.  I thought that perhaps if I spoke about fairies to others then they would see my dedication and I in turn would be able to actually see them.  Truth be told I would even be happy to just hear from them.  Anything really.  During this time I had a birthday and whenever any one asked me what I would like I would just reply with something fairy related.  My wonderful brother and his lovely wife gave me a set of Doreen Virtue Healing with the Fairies Oracle cards which is what this post is all about.

Every now and then, and not nearly as often as I should I get the cards out and see what they have to say.   I have always loved the idea of being some sort of psychic tarot card reader or such.  So far not much has ever come of it though.  I guess I have an issue with the little books that generally comes with the cards explaining what each card means.  I sorta think if you are reading someone's fortune through cards you don't need a book to tell you what they mean.

Tonight happened to be one night that I got the card out.  I sat there shuffling away with a rather blank mind.  After a few minutes or so I guess I began to lose concentration as a few cards fell out and onto the ground.  Which I took as a sign to stop.

These were the first five cards that fell

The next six were

As I read through these I feel that they are all incredibly relevant to my life at the moment.  There are more than a few Problems that I need to Rise Above at the moment.  Most of these revolve around Parenting and Children.  If I am able to rise above these then I am sure Family Harmony will follow.  Peace of Mind will come once I give in to Letting Go.

Exercise and not being lazy, or at least being active must surely involve Body Movement.  Naturally Positive Expectations should always be created and maintained as should Kindness.  Which is something I have been trying to impart on both the two bigger girls of late.  To round it all off hubs and I began discussing today the possibility of a Vacation in the not too distant future.

For now however it is getting late and I should really be considering bed.  Here's to a good week!

Email ThisBlogThis!Share to TwitterShare to FacebookShare to Pinterest
Labels: 2011, fairies, Inside me