Things I know about being disorganised and power outages

This week Things I Know is brought to you care of a power cut which went from 10.02pm Thursday night till 3.34am Friday morning. Because apparently you don't need electricity when you are sleeping. Which I might point out could well be true if you didn't live in the tropics during the build up. Thankfully though prior to the black out the very first rains of the season bore down from some rather black clouds that passed by making everything a bit cooler than what it has been of late.

Anyway being the largely disorganised being that I am, coupled with the fact that it is school holidays, I naturally didn't have a post scheduled before the power went out. Thankfully (or not) Lovely awoke at 3.08am and lay there yelling about how hot it was without the fan on. She then moved on to how dark it was.

Somehow I refrained from strangling her, or repeatedly stabbing her with a fork which quick frankly I think is a rather major achievement. Instead I calmly sat with her in the hope she would nod back off to the land of sleep. All the while going holy toledo batman I haven't sorted TIK for this week.

Just as I made the decision to get my phone and use the remaining 30% battery to see if I could do a rather dodgy make do post before the battery went flat the powers that be took pity on me and returned electricity to my humble abode (and the entire suburb). As the computer automatically came on as well (on account of me forgetting about the notified power outage and it being turned on when the power went out) I took it as the perfect time to get this post out. I mean 3.59am has to be good for something doesn't it?

Zany has now joined me which means I know it is well and truly time to wrap this baby up.

I know that I will be back at a more reasonable time and share some more things I know over at Making Time to Make it Matter because this week I really wanted to share the things I know about hanging with lots of kids during the school holidays.

I know that this is the easiest linky ever to join in with because we ALL know something
I know you should totally grab the little button below and come and join in and share what something YOU know.
I know that you should also check out all the things that others know and have shared in the links below.
I know that I get beyond excited every time someone adds a link. And I just know that you all want to excite me! 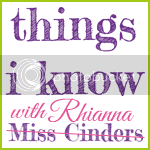 Email ThisBlogThis!Share to TwitterShare to FacebookShare to Pinterest
Labels: 2013, TIK