On the surface, to those watching in the distance, I must look like the worst mother. Ever. What other type of mother would be rocking up at Maccas before half past seven in the morning? 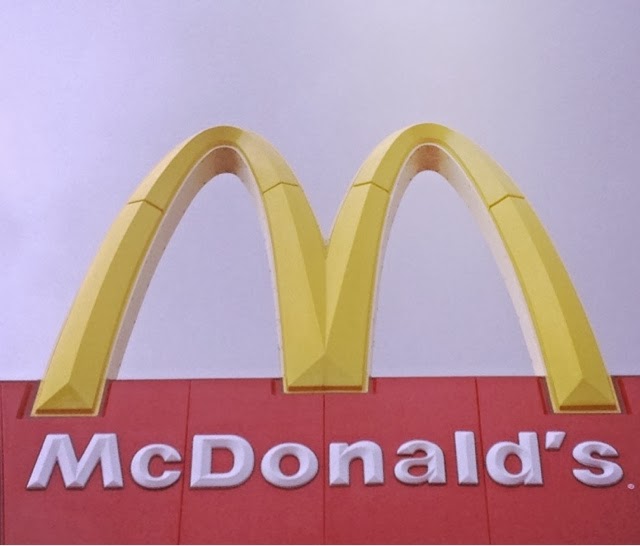 On a school day no less as well. Not to mention unbrushed hair and slept in clothes. Totally winning all round really?
I did however order them orange juice over soft drink so that must count for something right? Apart from the fact the oj probably has just as much sugar as the soft drink. Sigh. Maybe there isn't such a thing as winning?
I know I have felt far from winning of late. Yesterday as I stood surveying the disaster zone that is my kitchen/house/life is I could believe that I had allowed myself to become so overwhelmed. Incredible new levels have been reached.
Don't believe me? How's this then,
We had spag bol for tea on Monday night. It was awful. Slightly burnt, rather dry and quite tasteless. Needless to say it wasn't exactly devoured. Nor were the bowls emptied, washed or put away. Instead they sat waiting patiently on the bench.
Being conscious of how awful a bench full of dirty dishes would in the morning but unable to face actually dealing with them, I cleverly hid them in the slow cooker. Go me huh?
Till I discovered them still there some 24 hours later. Which was just as I was getting ready to serve up dinner and realised I had no clean plates to do so. Yes. We really only have one plate per person. It was Mr Awesome's awesome idea to encourage us to stay on top of the dishes. Glad that all went to plan so well.
Only it wasn't just the dishes that lead me to feel all is spiraling out of control. Rubbish bins are overflowing, washing, both clean dirty and otherwise is strewn from one end of the shoe box to other. Don't even get me started on the toys everywhere.
Sigh, double sigh and urgh.
Oh did I mention that I had to put Lovely on a plane at some ridiculous hour this morning? Which is why we are enjoying the Golden Arches at breakfast time on a school day.
She is only gone a week. Thankfully. Enough time for a touch of respite for us all, but short enough to stop us missing her too much. It really hits Zany hard when she is gone for too long.
So here I sit, sipping my latte, drying my eyes and trying to gather the motivation to go and tackle the awfulness that is my home.
Deeper than deep sigh.

Email ThisBlogThis!Share to TwitterShare to FacebookShare to Pinterest
Labels: 2013