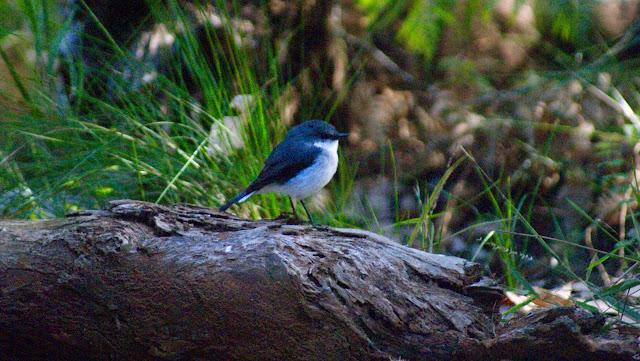 While some might struggle with the concept of blogging like no one is reading, for yours truly here, it is a piece of cake. There is no one reading, well next to no one. Given that this little space of mine is incredibly new and I haven't really told people about it yet it almost goes without saying that next to no one will be reading whatever I write here.

Which is actually a bit sucky because over the years I have realised that I do like to think that people are reading the various random thoughts that have managed to escape my brain and enter the wonders of the internet.

I have never been a writer that has written only for myself to read. In fact quite the contrary. I seem to only be able to write when I am under the impression my words will be read by at least someone rather than no one. Well apart from a few tormented teenage diaries that I went out of my way to ensure were never read but that was well before the internet existed.

As much as this space here is a new one for me, I have been writing on the internet for many years now. From memory, my first post is dated January 2008. While it is currently over on A Parenting Life, it was originally over at Rhianna's Random Rambles or something like that. It was never a space I felt very at home in, even though I designed and created it myself. Perhaps that was the problem though, all the headers were made by me with very little graphic knowledge and I couldn't help but feel it was gaudy and rather ugly.

Over the years though I created APL as a place I loved dearly and was incredibly at home in. Before I left on #ouradventureofalifetime last year my readership and community had peaked higher than ever before. It felt all kinds of awesome. I felt like I was connecting to people regularly and sometimes even making a difference to people thoughts and days.

Once we hit the road though blogging regularly became rather difficult. Mainly because the road we hit was in the middle of nowhere and without internet reception but also because we were just so busy living life. Mind you even when I did manage to get something up on the blog it wasn't nearly as well received as my posts were before we left. Which was the exact opposite of what I had expected to happen. Before we left I was certain that sharing our adventure would lead to even more readers than ever before. Turns out no one was overly interested in reading about how great it was escaping from normal life.

I had expected that once life returned to normality that the blog would immediately return to the state it was in before we left. Needless to say it hasn't and suddenly it no longer feels like home. Which makes me a little sad. I had thought the answer was to be found here at Rhianna Writes because that is such a cool name but sadly that hasn't been the case, well at least it has not been the case yet but in all fairness it is still incredibly early days.

More than anything I want to be a writer. And have done so for as long as I can remember. It is the whole reason I started blogging. A platform to make myself feel like a writer.

There was a time when I was actually paid to write articles and have them published online. It wasn't a lot of money but it was enough to make me feel like a real writer.  They were mainly parenting related articles because I had read somewhere that you should write about what you know. As a stay at home mum I felt I knew little else than parenting. Which is how I came about the name A Parenting Life.

Even though I am still a stay at home mum and my life revolves around parenting it is not a topic I want to exclusively. Mainly because as I delve deeper into the teenage years I find myself less sure of what I am doing and therefore not in a position to write about parenting unless it is how to do it badly. Which is again one of the reasons I though Rhianna Writes might be a good idea.

One of the biggest things I have learnt over my time as a blogger though is that it is imperative to comment on other blogs. Which is perhaps where I have fallen down over the last twelve months. Something that I hope to get back now that life has settled back down a little.

With that in mind I think this is a perfect place to end this post, it was inspired by Raychel who has founded Blog Exchange and since it is Tuesday and I have blogged I am joining in with EssentiallyJess for IBOT so there may well actually be a chance this post will get read. Also joining in with Kristy for I must confess

Email ThisBlogThis!Share to TwitterShare to FacebookShare to Pinterest
Labels: 2015, Blog Exchange, I must confess, IBOT