Words, writing, and what not 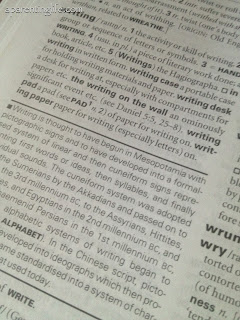 It is around six years since I first started to seriously consider the possibility of actually being a writer. With great conviction I convinced Mr Awesome that if we purchased a computer I would be able to somehow generate an income through writing on the world wide web. Surely there wasn't that much too it was there?

Ah yeah. About that. Little did I know.

Apparently every man, woman and their respective dog was also under the same misguided notion.

While I did actually manage to make some money over at Helium it wasn't enough to even come close to living on or even making much of a difference to our weekly budgeting. In fact all it really did was easily justify some eBay shopping. Which is not exactly a bad thing I know, but was still not paying the bills.

The good thing about Helium, at least back then, was that I didn't have to think about what to write. They provided the topic headings to choose from and away I went. There was also the thrill of competitions and the instancy of self publication. There is of course all of that still but the set up for topic selection has changed and I struggle a little to find something that takes my fancy. Well that and about a thousand other excuses that I make for most things I never end up doing.

I have held onto the notion of being a writer for as long as I can remember, though really probably only since my early teenage years.

Back when anything seemed possible.
Back when I was certain I was destined to go onto a life the wielded great power and responsibility. Back when all manner of things were going to take place.
Back when life was simple and I had little idea about most things.

Sigh.
Deep, deep, let it all out sigh.

While I do still hold onto hope that one day I will see my name in real print, as opposed to my blog or some other internet based thing that will essentially take anyone, I am not exactly holding my breath. I also take comfort in the fact that in some ways I can already consider myself to be a writer.

Given I try to write something at least nearly every day surely I have something in common with being a writer?

The lovely Alison over at Life In A Pink Fibro (who by the way is a real writer) has brought back the Weekend Rewind linky, where bloggers are able to link in a post from the past. This week the theme is writing. Right up my alley really.

While I was certain I had a post to share I wasn't sure which post would be the winner winner chicken dinner. A quick search of the blog brought up some 25 posts that had the word writing in them.

Selecting the best one was no easy feat. Which is why I am here writing now as opposed to doing the housework. Much to Mr A's disappointment I can tell you. I did however manage to narrow it down to a few and eventually just the one. However it seemed a travesty for those other gems not to get a chance at seeing the light of day again so without further adieu here are a few for you to read through.

From An insight into why I write (October 31 2012)
Writing it all out was supposed to make me feel better. So far it hasn't.
Writing is like my best friend. It listens quietly and patiently to whatever drama my head is trying to comes to terms with. It lets me say things I wouldn't ordinarily say in person. Words that if I said out loud I fear I may choke on so I don't even try to say them, instead bottling it all up waiting to explode under the pressure of it all.
Writing lets it all out. It stops me from exploding and keeps me together. Read more

From The Blank Screen (July 10 2012)
Staring into the screen she didn't know where to begin.  Her fingers hovering over the keys, trying to decipher which ones should be pressed in which order.  Pen and paper was so passe these days.

Any real writing that had to be done was always typed.  Mind you she had little choice.  Handwriting had always been too slow when it came to getting the words processed at the high speed that her brain would send words gushing out at.  She just couldn't write fast enough and it would turn out to be one big jumbled mess of nonsense. Read more

From On being a writer
One of the toughest things about trying to be a writer is getting started.  The coming up with ideas not a problem.  I have more ideas floating around my pretty little head than I know what to do with.  Actually getting those ideas out of said pretty little head and transferred through my fingertips to the keyboard and appear on the screen is another things altogether.
Writing is a process there is no doubt about that.  A process that is both different and alike for writers the world over.  Or at least I imagine it to be like that.  Having never really conversed much with writers the world over I am actually only guessing, but I am pretty sure I am on the money (or at least close to it). Read more

From Writing dreams with coffee (Feb 1, 2013)
Sitting there in front of the computer screen, her mind was blank.

Totally void of any and all thoughts or ideas.

But then that was nothing new. It was like the screen, or the keyboard or maybe even the chair, something anyway, seemed to suck every sensible consciousness out of her being when she sat to write.

Letting out a deep sigh she got up and walked away. Maybe a coffee would help.

Ok well that is probably enough for now. If you really want to read more of my thoughts involving the word writing, feel free to use the search bar to the right. If you are after reading some more of what other people think about writing then head here