It all sounds pretty exciting when I put it like that doesn't it? Running late, Dalai Lama and pubic hospital visits...Let me explain a little more.

The truth is I know only too well what it is like to run late. I was late for my own birth and haven't been on time since. And as for early, well I have never experienced it so I can't comment.

I have however been trying to rectify that recently. After all lateness really is a form of bad manners and I just detest low levels of manners. Not only that it is not the best of examples to give the girls.

Slowly but surely I have become better at managing my time and reducing my tardiness. And just between you and me, it has left me feeling rather warm and fuzzy, not to mention pleased with myself. So you can imagine my horror when at 12.10pm I get a text from a friend telling me they will be at my house in a mere twenty minutes with the expectation of me being ready to leave not to long after her arrival.

Horror that was only amplified by the lady at the video store who had run out of paper in her printer and was unable to print out my ticket that would be needed when my friend arrived to pick me up. Being as desperate as I was to get my ticket printed I offered to return the crowds within the supermarket and purchase some paper. It never ceases to amaze me how everybody seems to do their shopping on a Sunday near me, but never mind.

Now it would have been quite feasible for me to lose my cool at the situation before me but I didn't. Instead I searched for my inner calm, whistled a little tune and away I went. Sure those surrounding me in the longest checkout queues in the history of all checkout queues may not have appreciated my efforts but there is just no pleasing some people.

Thanks to the powers that be I somehow sped through the long lines and was quickly printing out my ticket and heading home with there still being enough time for me to be showered, dressed and ready for my normally on time friend to arrive a little later than she said.

We were on our way to watch His Holiness, The Dalai Lama speak. Certainly something we didn't want to be late for. Luckily we had allowed lots of traveling time and still arrived with plenty of time to find our seats without feeling rushed. Which was actually a rather nice feeling. And gave me the opportunity to snap these beauties. 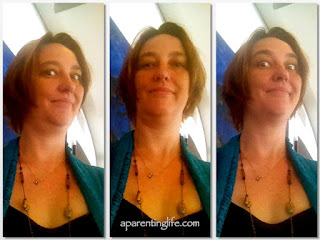 Ok maybe beauties is a little stretch. I am not really sure why when trying to get the perfect angle that flatters my neck the most makes my eyes go all crazy like but there you have it. 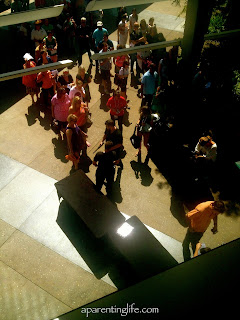 I was very interested watching all the lines of people coming in as well. As much as I live in a capital city, it is a very small one. One that was even smaller when I was growing up and I often feel more like a country town gal rather than city slicker.

To hear that people came to Darwin just to listen to The Dalai Lama speak blows my mind just a little. Had it not been for a very lovely friend who surprised me with a ticket as a gift I would probably not thought to have gone.

Having said that though I am glad that I went. It was an interesting experience and being able to say I have been in the same room as His Holiness is pretty exciting, based on the responses I have received from some people.

There was a part of me that expected to walk away changed forever. Naturally that part is currently bitterly disappointed. There was no instant life affirming change felt but there was some food for thought around kindness, compassion and letting go of anger. All simple and straightforward but not always things that we think about as often as we should.

Upon returning home to Mr Awesome and all the children, I was greeted with the news that Teapot's elbow had once again been pulled out and she either needed me to put it back in place for her or take her to the hospital. Yay.

Mr Awesome, as awesome as he is, for some reason never got a look in at putting the elbow back which I think he is secretly glad about. As tempting as it was to try and shove the three year olds's arm back together I decided to seek medical assistance. That is after all what they are there for.

The lovely staff at the hospital confirmed my diagnosis as well as the fact I should have been able to just pop it back in myself if I had of tried a little harder. Which I certainly will next time and thanks for tips.

Thankfully I have never had too many personal experiences with the local public hospital but when I have, I really couldn't find too much fault with the service. Sure it might have taken nearly two hours to get in and out but that really isn't anything to complain about now is it?

So there you have it some of what I know about running late, The Dalai Lama and public hospitals.


What do you know this week?
It's not to late to join in you know

Email ThisBlogThis!Share to TwitterShare to FacebookShare to Pinterest
Labels: 2013, life, linking up, TIK, Where I live