All it takes is one click a day
It's an ego thing what can I say?

Right! Well a little while ago I promised some photos of what I have been up to.  Naturally, these took much longer than originally anticipated, but at last they are ready.  Well they will be by the time this post is published.  (Just out of curiosity I will keep track of the time 12.30pm)
Rather than just publish the photos I want to do a bit of fancy editing stuff with them.  I have started one but as I am not really sure how to best use the app it is a bit hit and miss.  (If you are interested I have a Mac and the app I am referring to is Image Tricks Lite)
Unfortunately though I can't remember exactly what I did.  There are sooooo many different things to choose from and as soon as you hit the apply button the effects take place but the selected name disappears.  Remember a few lines back where I said it is now 12.30pm?  Well it is now 1.33pm.
Not surprisingly sitting here is not the only thing I have been doing.  You see before I could actually upload the photo I had to edit it.  Which I started doing.  I tried a few different things that were neither here nor there and I just continued to my scrolling and clicking waiting to see how my photo would be transformed.  When it got to this one, my attention was caught and I started to be a little impressed at how cool my flower was looking.  As I sat there admiring my ability to just randomly select awesomeness the dog barked, the washing machine beeped and some idiot outside my front house decided to test his vehicle's horn.  Not surprisingly after all that the baby woke up.
So I quickly saved my creation and saw to what needed to be done.  After feeding and cuddling the baby for a while hoping for a return to slumber I came to terms with the fact that sleep time was in fact over and it was now time for us all to get on with the day.  I then hung out some washing, snapped a few shots of a beautiful butterfly that DD2 found by the pond and chatted to my new neighbours.
Anyway enough of that. Hopefully from here on in I will remember to pay more attention to what I am doing in terms of changes to photos.  Hubs just saw the photo above and sounded disappointed to see that I had removed all the colour. So just for him
This time I remembered which featured I used.  The 'glow' under the "Quartz' tab.  Anyway it is now 2.31pm and while there is much else to show I will leave it here for now.  Apparently there are more pressing things for me to do such as 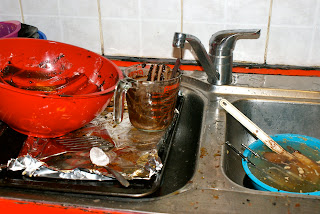