Aug 20 - Day 32
Windjana Gorge is what is known as a Devonian Reef and consider a rather special landmark. As such it is part of a National Park. It is located off the Gibb River Road which essentially is a gravel road with varying degrees of corrugation. So far we have found it not to be too terrible but I worry about pushing our luck on it. So many people have horror stories of busted springs and blown tyres from travelling on this road. I do not want to be one of them. 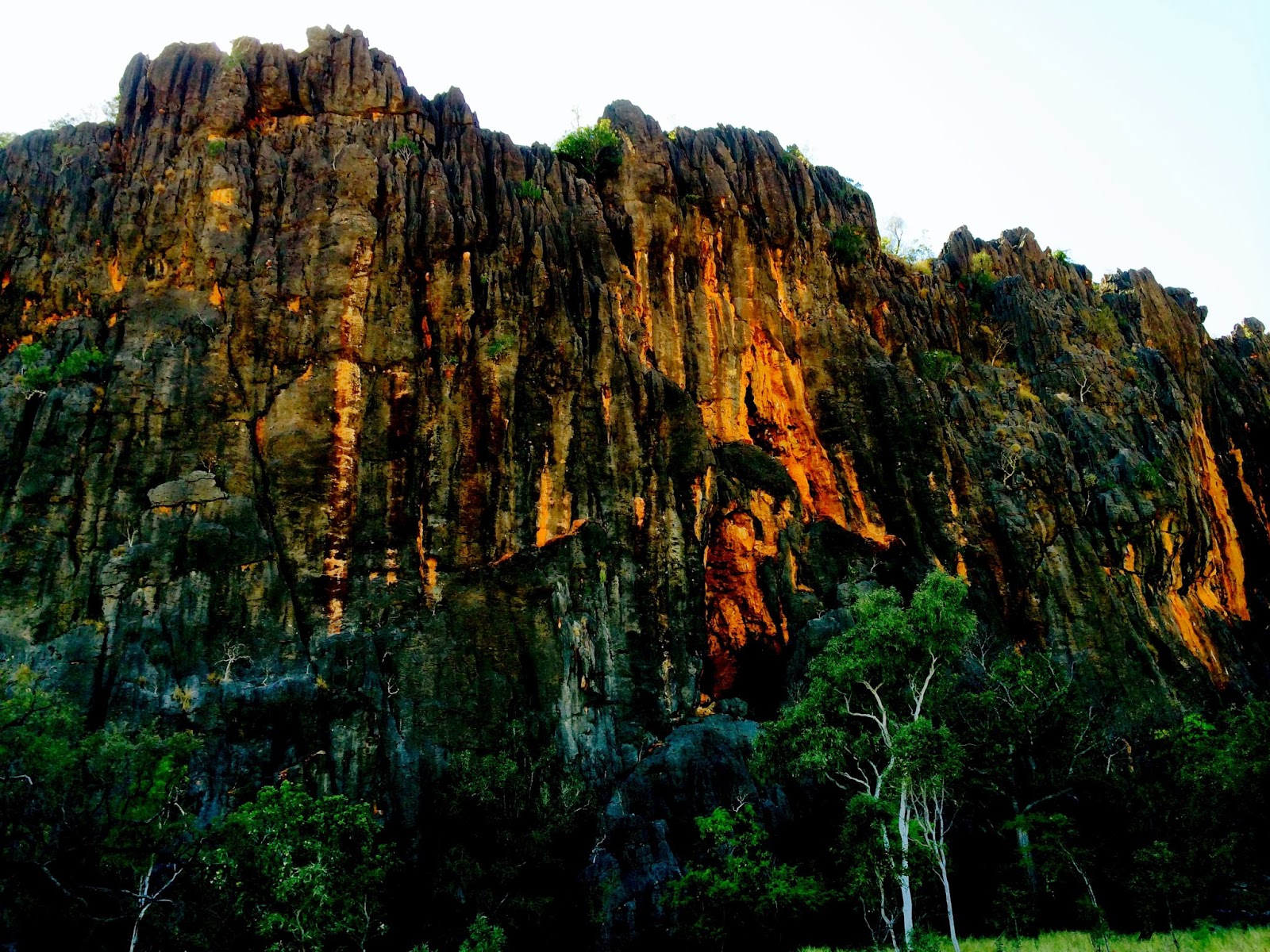 Rather than do the entire length in one hit we drove the first bit from Kununurra to Home Valley Station, then popped in from Fitzroy Crossing and now heading in from the other end at Derby. From what we can gathered we have managed to see a lot of the gorges found on the road. Though we did miss Bell Gorge and Mitchell Plateau. Always good to save something for another time though.

My highlight for today, at least so far is finally catching up with the journal entries. I know I have mentioned before how writing everyday proved to be more difficult than I anticipated and I know that in some ways it really doesn’t matter but to me it does. I am hoping that now I am all up to date I will be able to stay that way. Mind you some of the entries at this stage are only one sentence long to remind me where we were and what we did but at least it is better than nothing. 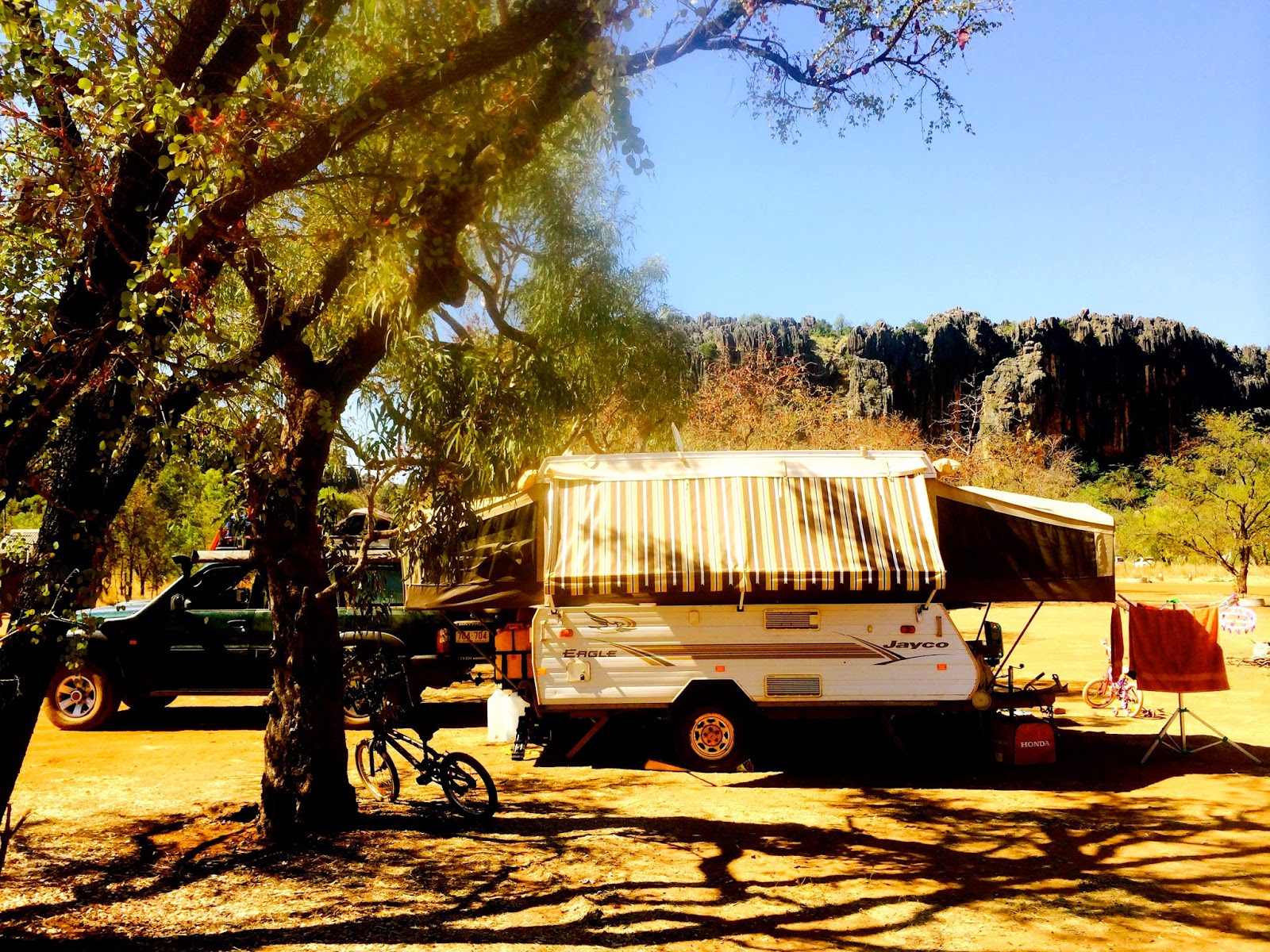 There are two campgrounds at Windjana Gorge. One which allows generators and one that doesn’t. As with most of the places we have been to so far the generator side is considerably less populated and where we decided to stay.

Aug 21 - Day 33
Surprisingly we did not wake up with much of a headache this morning. I say surprisingly because we sat up drinking and chatting away with our neighbours till who knows what time.

Since alcohol has been in short supply of late we were forced to tuck into our Kununurra Hoochery supplies.  A bright green aniseed liqueur to be exact. Which was quite perfect to sip around a campfire while trying to stay warm. The nights are still feeling incredibly freezing to poor little Territorians.

Our neighbours, who leave today, are a lovely couple from Perth who have taken three months off to take the kids (Boy 10, Girl 8) up to Darwin and then down the centre on an adventure of their own. It was so lovely to hang out with people our own age. As lovely as all the Grey Nomads that we have met are they are not really interested in late night shenanigans by the campfire. 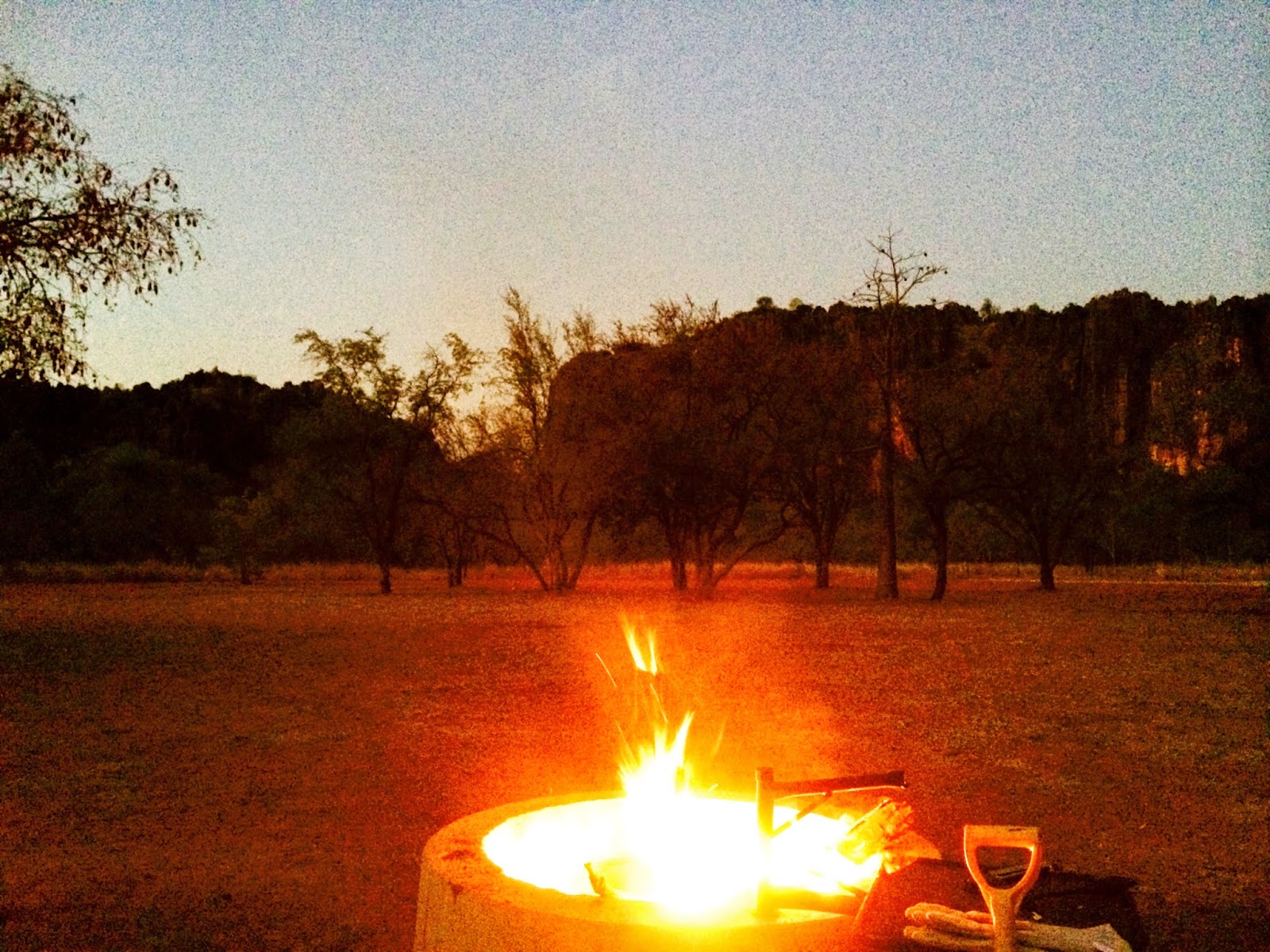 It was also lovely for the kidlets to have someone to play with. My heart swelled listening to them run around in the dark playing spotlight. I love it when they play the same games that I did as a child. Especially when they think they came up with it all by themselves.

While we had the torches out we took a quick trip down to the start of the gorge to go croc spotting. Windjana Gorge is one of the most densely populated fresh water crocodile homes. Shinning the spotlight out across the water unveiled hundreds of little glowing dots of the crocodiles eyes.

It was one of my proud mummy moments because I knew that the girls had their brave big girl knickers on to walk down there in the dark. I was even more proud when Lovely nearly stepped on a little snake and handled it all in a reasonably calm manner. 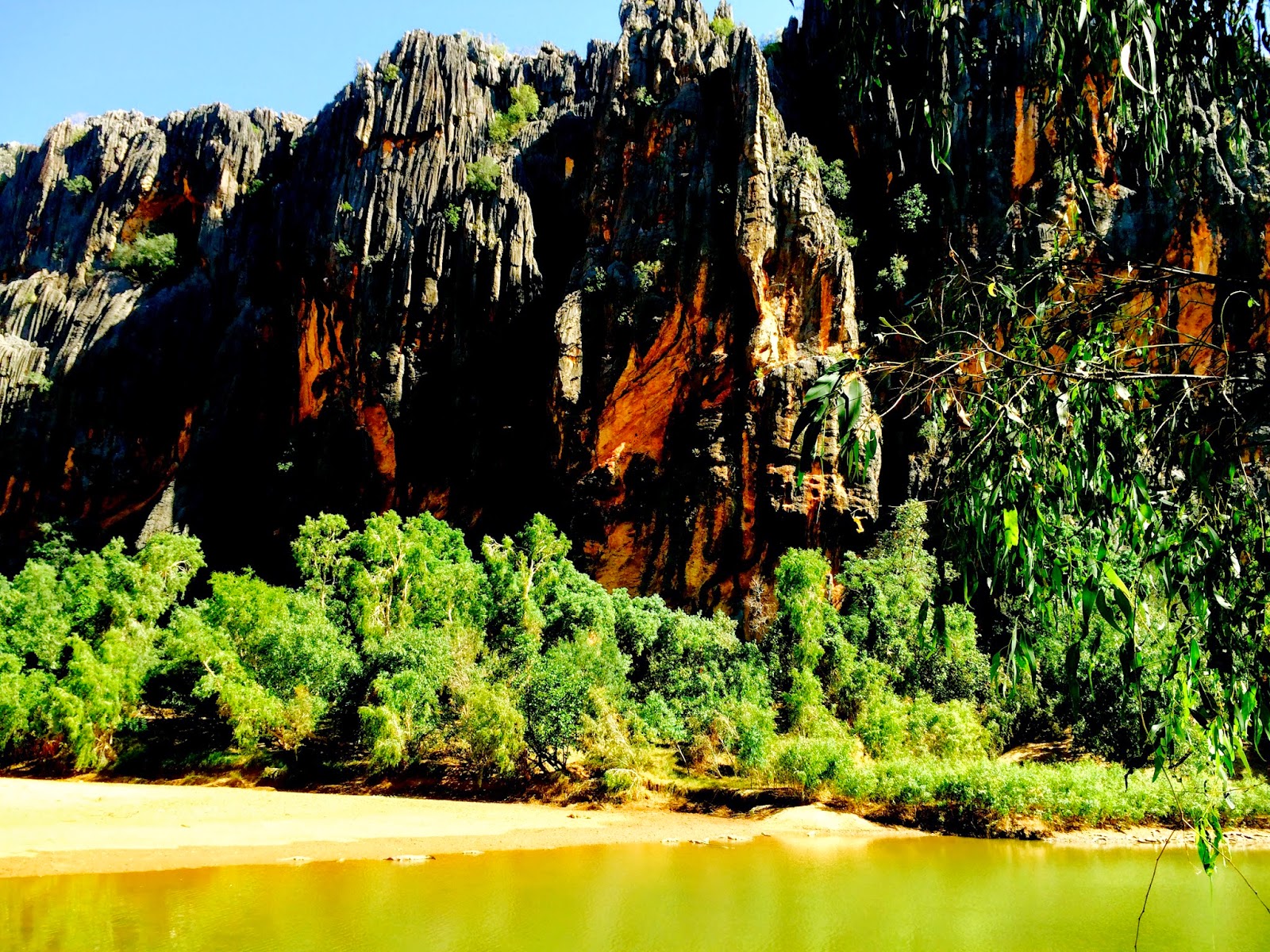 Even though we had arrived with plenty of time to head down there yesterday we never quite made it in day light hours. Which in many ways turned out to be a good thing because walking between the enormous gorge walls by torchlight made for a rather impressive first impression. All I could think was how I wished I knew how to capture it on film. I am still struggling with night settings on my camera.

Most people do Windjana Gorge as a day trip. Some stay over night and head to Tunnel Creek while they are in the area. As my parents continually told me, and as I keep telling the girls, we are not like most people.

When we went to Tunnel Creek the other week, we made the short drive (about 30 minutes) to Windjana Gorge to decide if we thought it would be worth coming back to camp at. Without even getting out the car I knew the moment we pulled into the car park it was a place I wanted to spend a few days at.

There was just something breathtakingly magical about the place that instantly drew me in. Even after spending two nights here I still can’t explain what it is that I love. I just know that I love being here. A lot.


Other than walking down to the gorge and doing some crocodile counting there is not really a great deal to do here. Having said that though I really enjoy sitting around watching the colours of the rock walls change as the sun passes over them throughout the day. 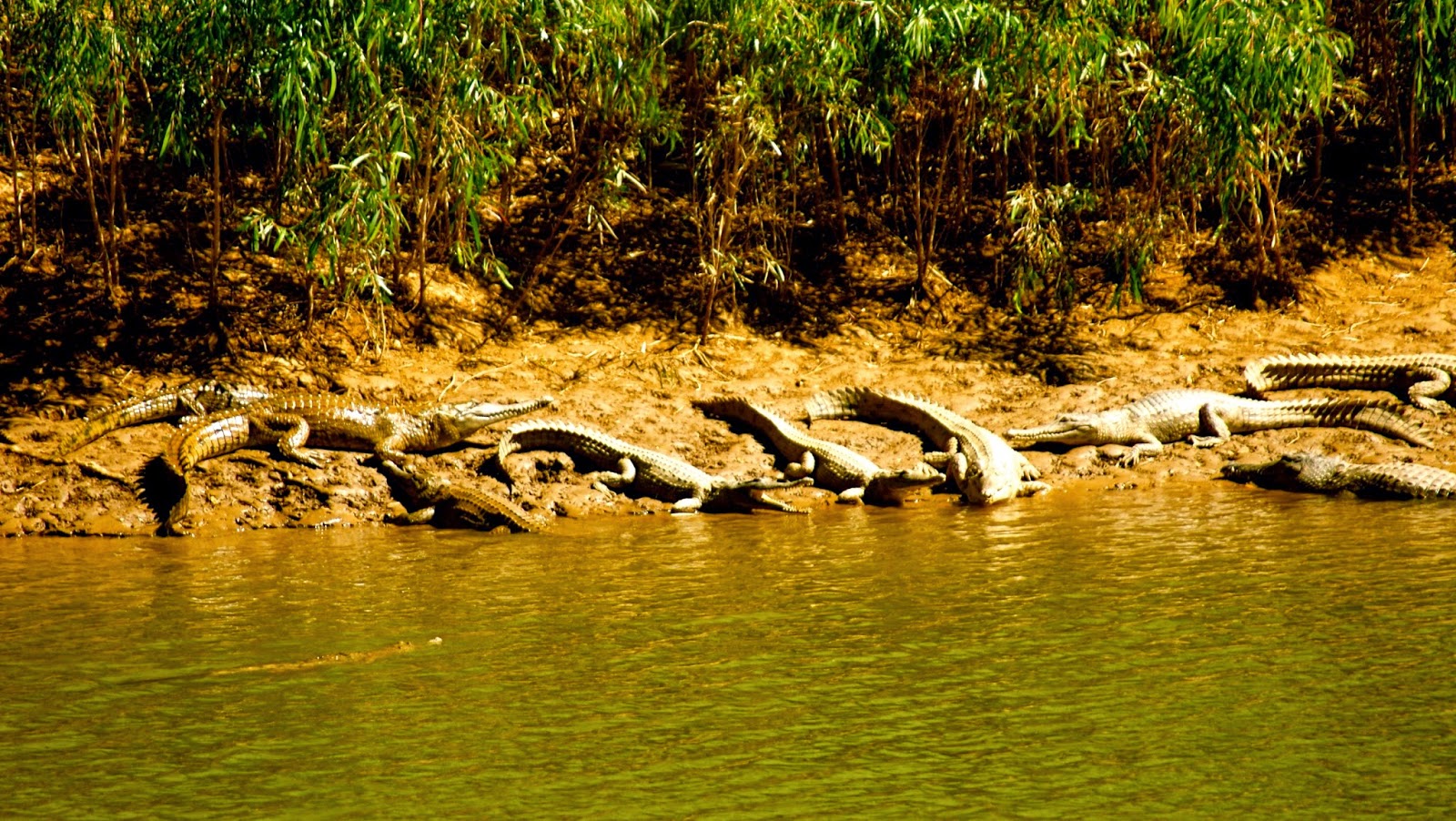 After walking through the gorge this morning we were all feeling a little hot and bothered. Mr Awesome and I contemplated taking a dip with the crocs but the colour of the water put us off a little. As they are only freshwater crocodiles they are more afraid of us than we are them so going for a quick dip could have been a possibility if the water was a little less green.

Instead we decided to head back to Tunnel Creek and have a swim there. Since staying here and chatting with the camp host we have heard that there are some rock paintings to look for there so checking it out again seemed like a great idea. Plus it was so much fun walking through there before everyone was more than happy to do it all again.

We were only able to find one of the paintings. It was on the outside of the Tunnel at the end. The other was supposedly inside the tunnel which made it rather difficult to locate. The rains of the last few seasons have been particularly heavy raising the water level quite a bit. Which means that the walls have been coated with mud and quite possibly covered up the painting.

Aug 23 - Day 35
Sadly last night was our last here. I still can’t explain why I love being here so much I just do. I can understand why this place has significance to the Aboriginals.

I guess in terms of campgrounds though this is a best of both worlds. There is no electricity, though you are allowed generators in on of the grounds. Mind you few people seem to actually do so. There are however flushable toilets with a tap outside for hand washing. The real icing on the cake though is the solar hot water showers. Mind you it is best to shower when no one else is as the water pressure is a little low but I am by no means complaining. 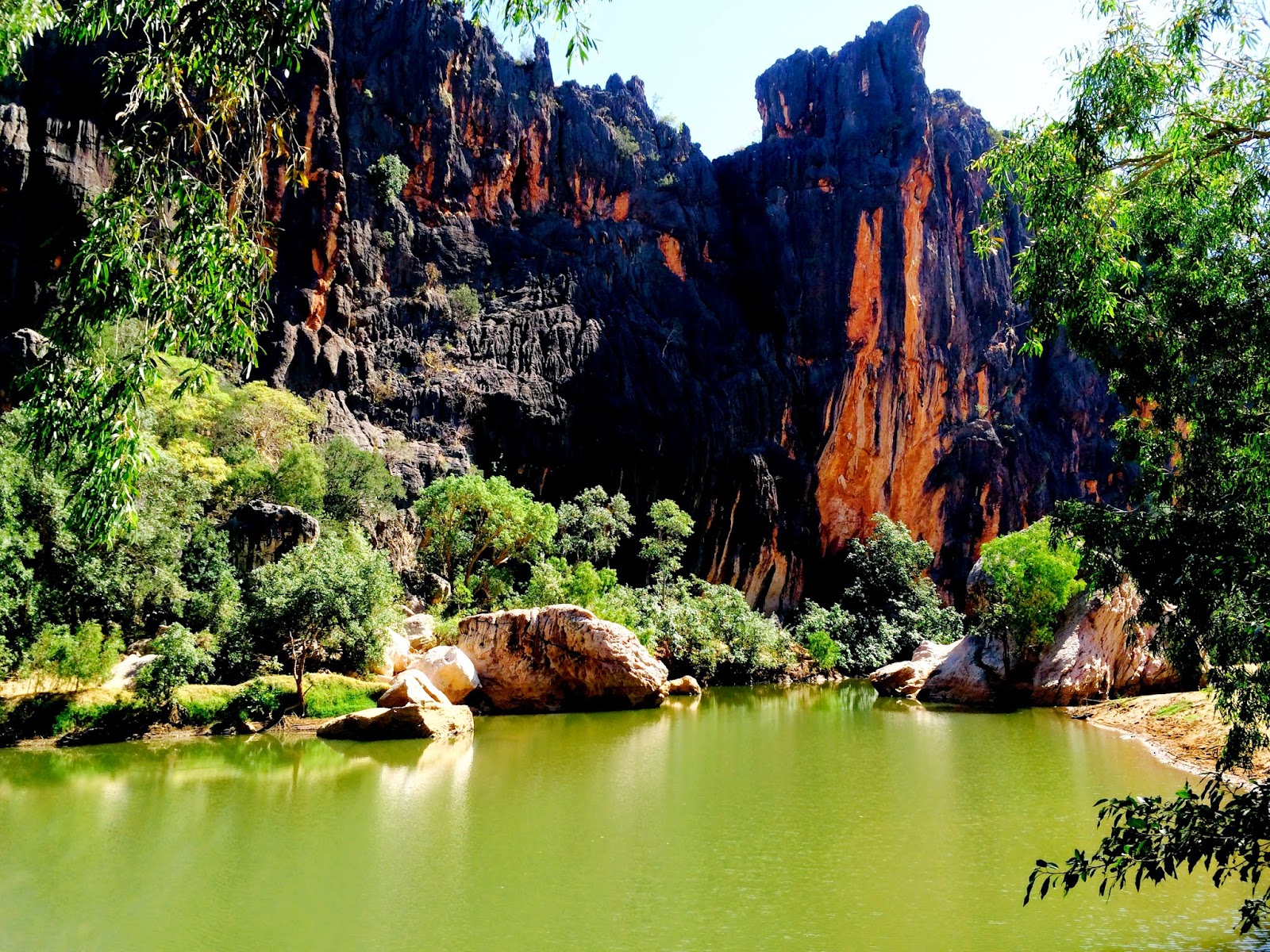 While there is running water for showering it is recommended to boil the water before drinking as it is not treated in anyway. We have 60 litres of water in jerry cans and a further 80 litres in Edna so we are pretty sorted. Still it was great to have water for washing dishes (and ourselves) easily on hand.

Other than whistling kites and bowerbirds we have not seen a great deal of birds. Not that it has mattered too much because the amount of kites is quite large and are rather interesting to watch as they circle round looking for food. The bower birds also provide great entertainment as they hop all over the place looking for treasures.

When we arrived the girls watched some other kids feeding scraps to the kites and pleaded with us ever since to be able to do the same. Mr Awesome and I agreed that they could give them a little bit of food just before we left. We were concerned that if we fed them they would scavenge through our sight when we weren't around. These birds were far from shy.

Watching thirty odd kites swoop around as the girls threw them bits of ham was all kinds of impressive. They are such a proud and majestic bird.

joining in with Jess for IBOT