I thought you blogged on Tuesdays?

Was the cry I am sure many a reader screamed today when they dropped by to read my new and interesting words of wisdom. Only they couldn't because there weren't any.

Well there were plenty a words of wisdom just not new ones. Apparently I don't blog on this Tuesday.

Not from want of trying though.

Well sure, I didn't try too hard last night when I opted to sit on the couch and watch Hamish and Andy's Asian Gap Year while finishing off this little beauty 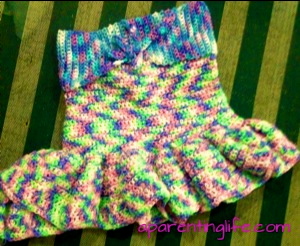 Yes that's right a little crochet skirt. Handmade and designed by yours truly I might add. It is going to be the birthday present for a rather special four year old. I had hoped that perhaps one of my girls might have been interested but they jumped at the chance to pass it on to someone else. Truly.

In fact their sheer excitement and delight in being able to give this garment away made it quite clear that  there was not even any point in me offering to make them one. In fact now that I think about it even as I was making these headbands on the weekend no one said then can I have one.
But enough of my children's lack of appreciation for my evident skills and creations. Zany was polite enough to say that while she liked the skirt it just wasn't something that she would wear because she doesn't like wearing skirts. And honestly I don't blame her on that one. I don't really like wearing skirts all that much either but you gotta admit a skirt crocheted out of wool would be pretty cool? Says the girl who lives in the tropics

Anyways back to me trying to blog on Tuesday with not much success.

With the school holidays well under way Zany and Teapot have become quite accustomed to amusing themselves for the first little bit of the morning. Which is nice. Gives me a little bit more me time and a chance to wake up at my own pace (read peel my eyelids off my eyeballs because I spent far too long playing on the computer to the early hours of the morning).

This morning however because I had not stayed up too late the night before I was able to awaken at a slightly earlier time with the intention of blogging. We all know about the best of intentions now don't we?

Needless to say far too much time elapsed and I was still without a post to share in my most favourite linky ever (and I am not just saying that because the host is a published author either) Try as I might I just could not get the words to flow. Poor Sally seems to be stuck by the side of the river indefinitely.

As it turns out, somehow, some way, eventually, I managed to get something that at least resembles a post over here on my fiction site that I rarely seem to write for any more. It is not the best. Not even close, but it is something. At least I have written. Twice in fact because I have now bumbled along here long enough for it to be a post as well!

Even though it is technically not Tuesday anymore I did actually start this post while it was Tuesday so that must count for something mustn't it?

Joining all the #IBOT fun found over at essentiallyjess.com