I should have known better

Remember how on Tuesday I wrote about the fact that even though Mount Foldme was slowly engulfing my kitchen table on the surface it appeared that in some ways I was feeling more together than I had ever felt? I should have known better 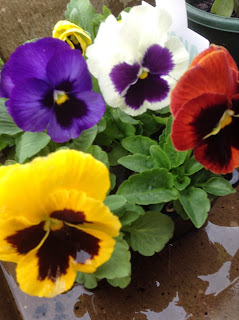 That's right folks sleep has become a thing of the past in this house. Well at least for me and The Little Two. The first night Teapot woke up screaming not long after midnight.  Some how I managed to squeeze myself into her single bed. Actually there was no somehow about it, I spent the entire time laying in my left side which meant I greeted the morning not just bleary eyed but also with pins and needles in my left arm. Which of course then meant I would spend the entire day worrying that I had somehow caused my blood clot to return because there was a chance that was how the original clot was caused.

Sigh. It is exhausting just dealing with my thoughts some days.

The next night Zany felt left out of the night time shenanigans so she thought she would join in. Teapot stuck to slightly after midnight for her first wake up and not two hours later Zany started to call out. The rest of the night was spent alternating between their two beds as apparently it was the night of the never ending bad dreams.

After two nights of next to no sleep facing the days suddenly seem less than appealing. Thankfully I live in a worlds where Netflix exists and suddenly having all day with no children around seems a little more appealing than it previously has. Yes that's right I miss having the kids around all day.

So two nights of no sleep have lead to two days of back to back episodes of How I Met Your Mother. Which I must say for someone who doesn't normally watch TV feels kind of strange.

Then in my half dazed TV induced coma a passing comment in a text message suddenly made me come alive and I flew into a flurry of activity madly making some rather dramatic changes that halfway through suddenly became a lot trickier than my not quite awake self could comprehend. Which with the dawning of a new day I am now wondering if I should actually keep going with it or not.

Change. So exciting yet so daunting as well.

But enough of me for now. Joining in with all the Weekend Rewinders