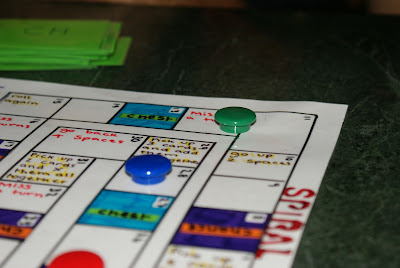 I know to you this photo might not look like much but to me it brings a rather large smile to my face.  This would have to be one of the best board games I have played for quite some time.  I know that I may be a little biased as it was created by no other than DD1.  But I also know how hard she worked on it and just how much thought she put into it.

I know my favourite square can just be seen in the photo.  It is the one that says go back 4 spaces.  It is the fourth square from the start.  It cracked me up every time someone landed there.  Perhaps it is one of those location jokes though...

I know that even though DD1 may test me in more ways than I care to admit she really is incredibly awesome.

I know that sometimes most of the time, the whole maintaining a relationship with someone is a lot of work regardless of who that person may actually be and what type of relationship you may have.

I know that I am more than just a little thankful that DD3 didn't injure herself more when she tumbled down the stairs.  I know every time I look at the bruise I cringe and beat myself up just a little bit more.

Deep down I do know that I am not a bad mother but when your toddler has a black eye it is not that easy to convince yourself of you ability to competently mother.

I know that the two men singing on the Footy Show with the shirts half unbuttoned had a bit of sex appeal about them.  I would share their names but their shiny muscly chests distracted me.

I know that I should go to bed but I really like having this post to go first thing in the morning so much better to get it out the way now.

Actually now I have thought about the whole bed thing my eyes suddenly want to shut.  So now I know no more other than it is time to sleep.

If you can keep your eyes open a bit longer you should head over to Shae's Yay for Home she is the awesome creator and  host of Things I Know.  Plus she always knows some really funny stuff.

What things do you know?