I must confess I can't do this any more, well at least for a bit 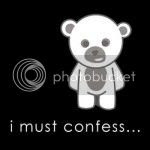 Today's post was supposed to be joining in with the lovely My Home Truths for the weekly confessional that Kirsty hosts. I was going to confess how for the next few weeks I would be neglecting my regular linky posts.

With the highly anticipated #DPCON13 literally just around the corner, there is much to be done around home to ease the burden of Mummy Guilt that I will inevitably hurl upon myself for leaving the children to the perils of their father for nearly one whole week.

As such my blogging time is going to be slightly impeded for pretty much the next month.

Which means that even if by some minor miracle I get posts out I seriously doubt my ability to go around commenting as much as I think is appropriate when joining linky parties.

In between all of that it is my birthday soon. Actually it is just under a month to go but I am super super excited about it this year. Well at least for the moment I am. No doubt there will be some point in the coming weeks that will see me crumble under the realisation that at thirty five I have very little to show for myself other than an awesome husband and three awesome offspring.

Which of course is awesome but not exactly the nobel prize for literature that I was expecting to have by now. Mind you I was also expecting to skip a few years of high school and university. Not to mention a call from the lovely folk at Mensa asking if I wanted join their special little club. Oh the delusional mind of a early teens.

Where was I? Oh that's right, confessing I am holding off on joining in on all my favourite linkies over the next few weeks.
I know hard to believe but I don't think I have any choice. Plus I am kind of hoping that I have enough regular readers I won't notice any difference.

Ok so maybe the delusional thing was slightly longer lasting than early teens, whatever


Mind you since I do kind of have a confessional post here I guess it wouldn't hurt to just link up...

Email ThisBlogThis!Share to TwitterShare to FacebookShare to Pinterest
Labels: 2013, Confessions, linking up