Arriving home and returning to normality...whatever that may be

When last I left you we had spent the night camped illegally by a river somewhere between Ingham and Townsville. I believe it may well have been Rollingstone or something very similar. Despite the circumstances causing us to rest there, it was in many ways one of my favourite parts of the trip home.

This is one of the last photos that I took on the way home. It was taken as we were heading into Mount Isa on Friday afternoon. It had been a long day as we had been trying to make up for lost time the previous day. 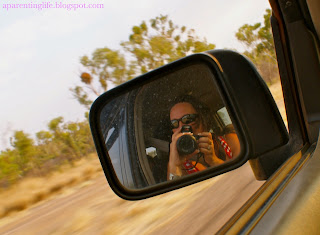 This one was taken around the same time 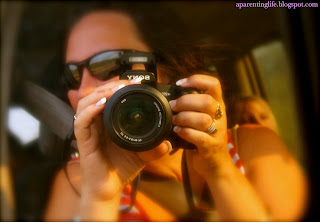 I am not sure which one I like better.
Though I am also not sure as to why I felt the need to take photos of myself in the wing mirror. 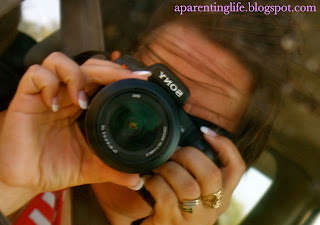 Our last day of travel saw us leave Mount Isa at around 8am. The plan was to see if we could plough on through to Darwin. It was a massive ask on both the kids and the car but Mr Awesome and I had decided that home was where we wanted to be and that was that.

Not long after 1am we pulled our weary selves out of the car and into the comfort of our own home. The biggest and smallest children stayed asleep during the transit from car to bed. The middle one however decided that it was all too exciting and sat up for a further two hours.

After a quick three hour nap Miss Two woke me, and her sisters, so we all trundled on downstairs and prepared ourselves for the longest day ever. There was not a lot of action going on anywhere but the smiles on the girls faces showed how happy they were to be at home and reunited with their pets.

As much as I hated to rush of school this morning it was nice to be able to spend time with Mr Awesome. I will miss him so when he returns to work on Wednesday. My dream, well one of them, is where we are able to spend all our days together and somehow still make an income. He really is such lovely company.

As you read this, Mr Awesome and I will be enjoying our final day of holiday together. I am not really sure of what it will entail but I want to make the most of it. I really do love having him all to myself while the girls are at school so once again I will be a little slow, or perhaps absent with comment love.
I know, I know, the last few weeks have seen me being a terrible commenter but I do assure you this will be the last week that I am a slacker. A big thank you to all who have been stopping by and sharing in my adventures.

Joining in with the lovely Jess over at Diary of a SAHM for the most awesomest linky ever...IBOT!!!