Last week I was thankful that it was a brand new day. This week I am most thankful for the fact that I wrote that post. Thanks to that one little post I went on to have one of the best nights ever. My faith and trust in the universe has well and truly been reinstated, perhaps even stronger than before.

As I was driving home on Friday afternoon, one of my dear readers, who also happens to be a teacher at school rang me. Thanks to a bizarre twist of fate she had a spare ticket to the concert I so desperately wanted to attend. After reading my post she wanted to offer me her spare ticket.

I could not believe my ears. I don't know I managed to remain in control of my car I was so excited and yet dumbfounded at the same time. I just couldn't believe that it was all really happening. You see by Friday afternoon I was just about at peace with the fact that I probably wouldn't be going. I wan't happy with it but I was ready to accept that was just the way things were going to pan out this time.

As it turned out it was only by chance that she read my post. She had originally scrolled past it on her Facebook feed but then when she saw it had a picture of Kenny she went back to have a read. Turns out she is a rather large fan of the man himself as well.

Her husband had just happened to be passing a mate's house earlier in the day who was setting up an outdoor kitchen in his front yard. He stopped to find out what he was doing. Turns out he was going to be a food vendor at the concert and was getting ready for his final inspection by authorities to ensure his equipment was up to scratch. He also had a spare ticket that he passed on just in case he knew of anyone that wanted to go. He didn't at the time but took it anyway. 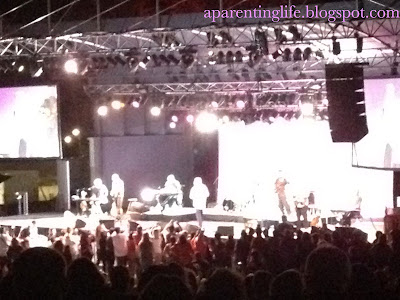 Moments after he came on stage. Not the best photo but certainly the best time
The concert itself was nothing short of amazing. I never in a million years thought I would ever get to see such a super star perform. While his face may not exactly resemble that of a 74 year old the rest of his body did. He slowly shuffled across to center stage when he came out and it wasn't long before he sat down. But his voice was still wonderful and really that is all that matters. 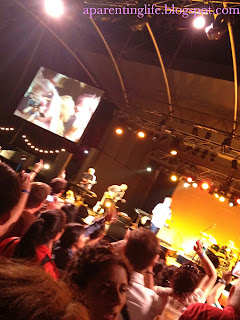 For a whole hour I was totally transfixed. Pure and utter bliss.

He played all my favourties and even now I can't think of a song he didn't sing that I wished he had of. For the first few songs I was a little emotional and may have shed a tear or ten. Thankfully it was dark by that time.

Music is an amazing thing. It has a way of transporting you through time and space. It makes you feel things that you wouldn't normally. Sitting there on that hill, surrounded by some seven thousand other people (which is what a sell out crowd is up here) listen to one of the greatest names in country music I could suddenly feel my dad by my side.

For nearly three years I have been waiting to say that I could truly feel my dad's presence. There is no doubt that he was sitting there with me on Saturday night. For that I am incredibly thankful as it was one of the nicest feeling ever. 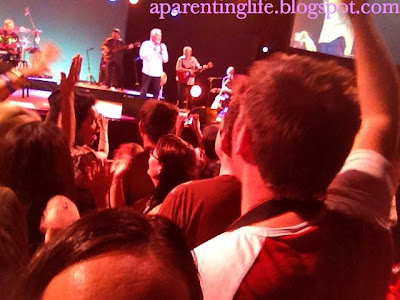 Yes that is my forehead, proof that I really was there

So there you have it folks, dreams really can come true. For that I am eternally thankful.