The End of a Day 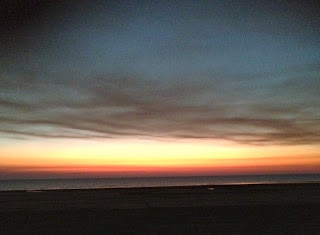 Sitting there she could feel her eyes begin to burn. She knew that she should, but she just couldn't. It was all just too hard, as always.
The muffled laughter and drunken chatter was slightly drowned out by the continuous whirring drone from the dryer. The one that she had fought ruthlessly never to purchase but was now secretly glad she had given into.
Her skin was sticky. Both from the sweat and the drink she had earlier spilt.
She didn't know what she was going to do. Bed seemed like a reasonable option but she wondered whether she would actually go to sleep. Lately it didn't seem to matter how sleepy she was sleep was still elusive. A dream so to speak.
It had been nearly a year yet at the same time it felt like forever. As always her life resembled an array of cliches. Pointless metaphors that everyone could pretend to understand yet had no real meaning at all.
Standing up she clicked on shut down.  It was enough for one night.  The answer to whatever she was looking for was not going to be found staring at that screen tonight.  Possibly not ever, but definitely not tonight.
Switching off the kitchen light she trudged her weary body up the stairs.  Each step getting heavier than the last.  She felt like her legs were made of lead.  In fact her whole body felt listless and heavy.
Turning the water on she waited for it to heat up.  Damn cloudy days meant the heater would be a bit slower and the water not as hot as she would really like.  She wanted to feel like she had been steamed clean.  She wanted the water to sting her skin.  She wanted it to feel like little darts of water piercing through her skin reminding her that she was still alive.
It wasn't that she didn't want to be alive but more of she didn't know how.  The past year had felt like it was a combination of slow motion and auto pilot.  The edges were all blurry still and she didn't know what to make of it all.  She knew that she had gotten through this far but how she would keep going remained a mystery.
Realising this was going to be as hot as it got she tried to enjoy what was there.  It wasn't nearly enough.  She needed extra heat to penetrate through the numbness that had engulfed her body.  Reluctantly she turned the hot off.  The water began to run cold, for a second close to freezing.  Only for a second though and only close to.  She was still left feeling unsatisfied and disappointed.  A reflection of life really.
Climbing in between the sheets she wished she had of taken the time to change them.  Yesterday.  After all that was designated sheet changing day.  What did matter now anyway? It was not like there was anyone else to share it with.  And with that the tears started flowing and her head started pounded.  It was all just too much.

Email ThisBlogThis!Share to TwitterShare to FacebookShare to Pinterest
Labels: fiction