I may not be blogger of the year but I am...

On my way to be in the running for a mother of the year title. At least for a little while.

The school is having a car boot sale with each class given the opportunity to host a stall of their choosing. With the trash and treasure, cakes and sausage sizzle already taken care of  I wondered if there was anything left for my class to do.

After much brain hemorrhaging I came up with jelly and ice cups. Obviously not in the one cup but as two separate items. I was totally impressed with my brilliance because I was certain that my solution was cheap and simple yet still had a sellable feel to it.

Thanks to some generous parents in the class all the cordial, cups and jelly was donated. Which is a bit awesome because that means everything that we sell is pure profit. Since the class teacher gets to spend this money directly for the benefit of the class the more the merrier.

It is times like this that I am super glad to be in the possession of a chest freezer and a spare fridge. While a more worthy candidate for the mother of the year title may have started making some of these amazing wares a little earlier on in the week I have still managed to allow enough time to make rainbow cups. Well at least two different coloured tiers. That's nearly like rainbow isn't it?

So what's any of this got to do with not cutting as blogger of the year?

Not a lot really. Other than it gave me something to write about which this week I have struggled with. It has been a hectic week filled with nothing other than the anticipation that this time next week we will be off on our adventure. There is so much that I should be doing I seem to have shut down and unable to actually do anything.

My head hurts just trying to think of it all let alone actually be able to coherently write anything.

Which is a shame.

Because there is a post I should have written a week ago, at least, that still hasn't even made it to the pipe line.  Sigh.

Like a few other bloggers around the trap, I was sent some rather cool Havaianas to celebrate the release of a new range of prints that include My Little Pony and Transformers. I know totally cool right? At only $24.95 they are a bit of a bargain as well.

Having had a few pairs of Havaianas over the years I am more than impressed with the level of quality that comes from this brand. I must admit I was just a little tickled pink I got the email asking if I was interested. It was one of those moments where I felt even closer to making it in the world of blogging.

Why I haven't written the post till now I am not really sure. Seems to be just the way I roll. I get what I think I want and then don't really know what to do with it. I can hear my dad saying no brains and happy without them. I have heard him a lot lately. This is both bad and good but best discussed in another post. 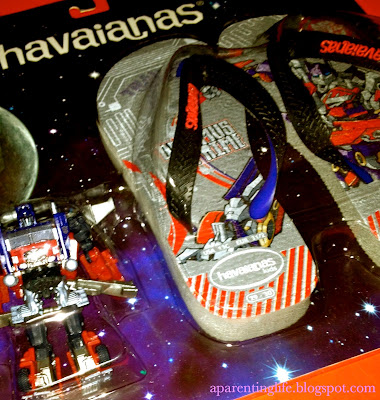 Naturally Miss Six begged and begged me to let her open the My Little Pony ones. After three days she wore me down though on the pretense she would only try them on once and then they were going back in the box already for when I was able to make time to photo them.

I ended up just snapping the above shot on my phone half way through typing this. Though you could probably work that out just by looking at it. Truth be told most of my good photos are taken purely by chance. Hence why I was delaying taking some shots for this.

In my head I had hoped to set it all up beautifully with an air of professionalism...Hence the no blogger of the year, well at least not yet.

Doing some Friday blog flogging With Some Grace

Oh and just so you know all the opinions mentioned about are my own. I was sent two awesome pairs of children's Havaianas that also included a little toy. These initially made three girls smile but then one realised they were too small for her and the other two have done nothing but bicker and fight over who gets to wear the thongs and who gets to play with the toy. I was tempted to title this post The Bain of my Existence but thought it a little too dramatic for what was supposed to be a light and fluffy post.

Email ThisBlogThis!Share to TwitterShare to FacebookShare to Pinterest
Labels: 2012