You know you're a mum when..

...You go to do one thing and it comes out another.  Mainly because the time it took between thinking and doing was so long there was more than one distraction along the way.

Oh hang on a minute.  That actually doesn't have much to do with being a mum at all.  That is more about how this post is nothing like what I had hoped for when I started it days ago.  Yes that's right days ago.  In my never ending battle to overcome disorganisation I was actually hoping to be super prepared for today's #IBOT submission.

When I found myself sitting at basketball on Saturday, without children in need of watching I might add, I realised it was the perfect chance to get a bit of blogging out the way.  As you have probably noticed I have struggled a little of late maintaining a nearly daily appearance.  Which to be truthful sorta bums me out a bit because as I have already mentioned I am a bit of a numbers gal.  When I post near on daily the numbers satisfy my ego and I find the encouragement to write a little more.  Which takes me one step closer to writing the piece that will change my life.

Now where was I?

Oh, that's right, at basketball, blogging on my phone as I found myself blessed with a few spare minutes while I waited for Miss Just Turned Eleven to start playing.

As you can see by the title it was going to be a quirky little post about some of the more unusual ways to tell you are in the company of a mother.  It was a dot point kind of thing, which is not normally my style but I thought maybe I could branch out a little.

The first had something about telling the time by what ABC Kids is showing.  To be honest with you though I felt like I was struggling with the wording.  They just didn't seem to fit right.  I let it be though planning on changing when I edited later.  Since you know I would have time for that since I was trying the whole being organised thing.

The next couple revolved around handbags, snacks, toys and spare changes of clothes that may or may not have been replenished since last time they were needed.  All very witty I assure you.

As I sat there watching one of the best under 14 games I have seen for a while I was feeling rather chuffed with myself.  I was certain this was just the kind of edgy blogging that would take me to the next level.  In between quarters I would have a quick read and smile.  Reminded of my awesomeness.  Somewhere along here I am positive I took the time to save in my online drafts folder.

Not overly surprisingly before I knew it Monday night was upon me and I realised my #IBOT post was still not complete.  Remembering my prior organisiation though I worried not, there would be plenty of time to tidy up what I had started after the kidlets were put to bed.  Or at least that would have been the case had a certain child not turned feral and decide to fight sleep for as long as possible.  Leaving one mum rather tired and far from a blogging frame of mind.

Also not surprisingly I have a bucket load of excuses as to why it took forever for me to actually get around to finishing the post.  Thankfully for you I am going to spare you the gory details and instead just cut to the chase.

When I finally got around to the post I discovered somehow all I had saved was the first line.  The first line that I hated and planned on editing anyway.  I spent all day trying to think of how I could rewrite the post and still came  up empty handed.   Well not quite empty handed just not really enough for a decent post.

Despite going to the trouble of taking a photo 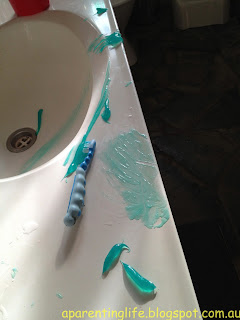 It was meant to go along of the lines of

What do you think are some of the tell tale signs about being a mum?


Oh and even though it is late on Tuesday, it is still Tuesday and I have blogged to you know that that means....

Email ThisBlogThis!Share to TwitterShare to FacebookShare to Pinterest
Labels: 2012, blogging, day to day, IBOT, linking up