Klaus, this one's for you. Let's petition Jetstar 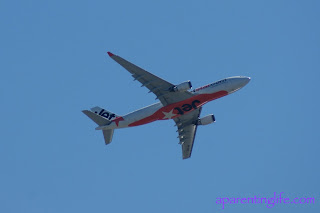 Sometime in early March I received an email from change.org regarding a petition against something to
do with credit card charges and Jetstar. I skimmed over it and pressed delete without giving it a second thought. After all I had a conference to get ready for and I while I was flying it was not with Jetstar.

Despite living in a capital city that is in the middle of no where, flying is not something we do very often. With five of us it is just to dang expensive. Last year when we were invited to Cairns for my sister's wedding it worked out more economical to road trip than fly. Which is just ridiculous. It was a round trip in the vicinity of 6000km.

So when I do fly I like to do so in style. And by style I mean an air carrier that provides me with food and drink without any exorbitant extra charges. Which kind of only leaves me with one option. Thankfully, for the most part if there is only one person flying and if you time it well and in advance, you can generally pick up a reasonably priced ticket. As such I rarely pay much attention to any of the airline kerfuffles that are often in the media. Hence the skim and delete with the whole Jetstar petition email.

Anyways fast forward a week or so to the end of conference dinner. I was fortunate enough to be on a table with many wonderful women. One of whom was Coralie. Next to her was her sponsor for the conference. The founder of 1st Available (which by the way is an awesome idea so make sure you head on over and check it out)

So there we were, all talking about this and that and whatever. Who has had what results in social media and what not (what else would a bunch of bloggers be discussing) when the 1st Available guy, who goes by the name of Klaus, pipes up with, "well my petition on change.org has nearly 35000" or something to that effect.

Naturally he had all our attention.

Turns out that Klaus was referring to the Jetstar petition that I had simply thrown to the trash without a second thought. Meeting the person behind something I so quickly discarded made me feel a tad bad. To make up for my indiscretion I promised to write a post sharing the wrongs of Jetstar's ways.

So what is the petition about?

Well every time you book online with Jetstar and pay by credit card (essentially the only means available) they hit you with a $8.50 surcharge per passenger per flight. So if I wanted to take my little family of five on a return trip, I would be charged $8.50 a total of TEN times. Which for those to lazy to do the maths is an extra $85.

And that my friends is beyond crazy. In fact that is half the price of what I paid for a one way ticket to Sydney.

To add further insult to injury the Reserve Bank of Australia (RBA) has recently put out a statement saying such charges are just not acceptable and should be dropped.

If you want further anti Jetstar information then check out dontflyjetstar.com