In case you missed it, last week saw me turn thirty four.  To say I had mixed feelings about it is a bit of an understatement.  As it turned out I had nothing to worry about.  In fact there was a teeny tiny part of me that regrets my mini meltdown and no body loves me.

In previous years my birthday has been celebrated over a number of days.  Why let such a momentous event be restricted to celebration on just one day.  This year was no exception.  I guess in many ways I could say it started way back on Monday when a lovely friend took me out for lunch.  The local pasta hang out had some new specials that were pretty special indeed.  Two pizzas and soft drink for twenty bucks!  Not to mention incredibly yummy and almost to big to finish.

By the time my sister and her gorgeous little family arrived on Tuesday afternoon the birthday magic was alive and well.  Increased with the arrival home of my brother on Wednesday and a family dinner to boot.  In amongst it all I spent some time hanging with Jess from Diary of a SAHM which is always more than a pleasure in itself.

Thursday was scheduled in as a big one. There was coffee, lunch, shopping, oh and one of the major fundraisers of the year for the school.  Thankfully the girls classes were easily sorted and everything turned out to be a huge success.  The super big plus side was it meant I didn't have to cook or even think about dinner and the night before my birthday.

Oh and I also got presented with this 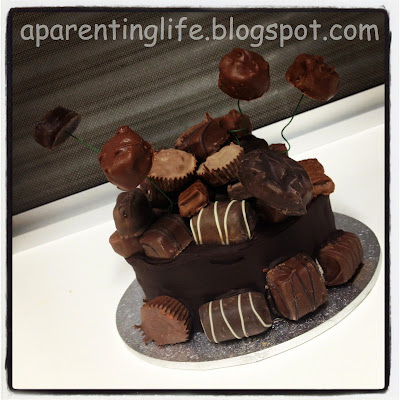 Yep it really did taste as good as it looks.  In case you are wondering they are non other than Whitlam's chocolates.  My all time favourite!

My dear friend (yes the same one who took me out to lunch on Monday) just happens to be the very talented cupcake baker from House of Cupcake  I had been planning on asking if she would be able to squeeze making me a cake into her very busy week.  Only when she told me just how busy her week was I decided against it.  All week long I have listened to this magnificent cake that she was making only to have it presented to me as a bit of a birthday surprise.

And the best part is I still haven't gotten to my actual birthday yet!!!  Talk about awesome.

Naturally the children woke early, only to be swiftly taken downstairs by one incredibly wonderful husband.  I had been planning to get up at eight only the excitement of it all was too much and I called everyone in so they could shower me with gifts.  Well at least that is what I was hoping for.

You know that incredibly wonderful husband I mentioned earlier? Well he didn't disappoint here either.

Other than a token CD that I brought myself a week earlier and hid in the kid's drawers, just to make sure there was a present for the day, I hadn't really given any clues as to my heart's desires in terms of presents.  I may have mumbled at some point something about an armband to hold my phone while I run but that would have been it.  This year I really just wanted to be surprised.

Surprised is an understatement.

Amazingly wonderful superstar husband got me a tandem skydive!  Super super exciting.  At this stage we haven't got a date for when the big jump is as the weather is a little tricky to predict, but rest assured it will be in the very near future.

So this Thursday I am beyond thankful for all the trouble and thought that those who love me put into to making it my best birthday ever.

Joining in with Kate for her