Yesterday was an awful day

Not in a somebody died or I got attacked by a thug awful.
But more a could anything else go wrong and are you sure it is not ok to throttle children at times kind of awful.
There was no doubt that today was Monday and there was no doubt that I was still thinking (or rather hoping) it was Sunday.

Some time in the last week or so I did notice that the car seemed a little slow to start. Being anything but mechanically inclined I didn't really spend any more time thinking about it though. Which is a shame because if I had of I might have got the batteries looked at prior to discovering them not charged this morning.

Being a big non environmentally friendly but incredibly cool to drive anywhere 4WD my car has two batteries. One takes care of powering the engine and the other is used for charging various things that need charging. Previously if the first battery went flat there was a little button I could press that would then kick over to the other battery and all would be fine and dandy. Of course today though even that battery is as flat as a pancake.

Thankfully though after I spate of misfortune on the road trip we are now the proud owners of a roadside assistance membership. Or at least my husband is. Which meant shortly after arriving at work he had to come home and wait for the car to get fixed.

You can but imagine the sort of joy that would bring.

Walking back into a house with three children bouncing off the walls like rubber possessed beings. Two relishing the thought that maybe the car will stay broken all day meaning escape from the perils of school. The other beyond excited about the prospect of having their playmates around all day long.

Beside myself at the thought of having the bigger two around on a day when I thought to be free of them. It sounds so awful when I say it like that. But right now I feel the need for all the freedom that I can get my grubby little hands on.

It has been super hot and sticky. The rain still not even close enough to be hoped for let alone promised or expected. Clouds slowly filling the sky and trapping the hot air below. Captivating the heat so it lasts even longer. Speculations of showers becoming even fainter as the clouds drift off elsewhere to ease the burden of the rain that they contain. 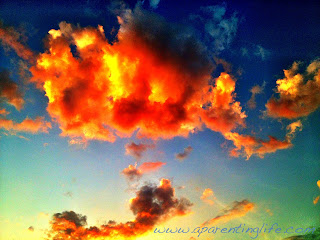 The children can not stay home today.

I need to wash clothes and put others away. The same can be said for dishes as well.
I need to clean and sort and stuff.
I need to blog and I need to just sit and think and be.
I need them to go to school.

Did I mention the washing machine is one the blink?

Naturally the repair man will come as soon as he can squeeze it in. Whenever that may be.

On the upside, because there is always and upside.

The car got fixed and while we have to pay for the batteries at some point, that point is not now. Which is good. The branches of the money tree are a little sparse at the moment. I can't but wonder if will ever be in full bloom though.

As always there is more, but I am sure this is enough awful for one post. It was enough awful for day no doubt about that. Only there were times, as I often do, as I am sure most of us do, when I heard something that made me go, my awful is not nearly as awful as that awful.

Proudly linking up for IBOT with Jess