When I was asked if I was interested in the taking part in a papaya recipe challenge I was just a little bit excited. When these little babies turned up on my doorstep I was even more excited. Now I know that from that photo the red pawpaw (the longer of the two) looks a little worse for wear. When I cut it open though that was far from the case. 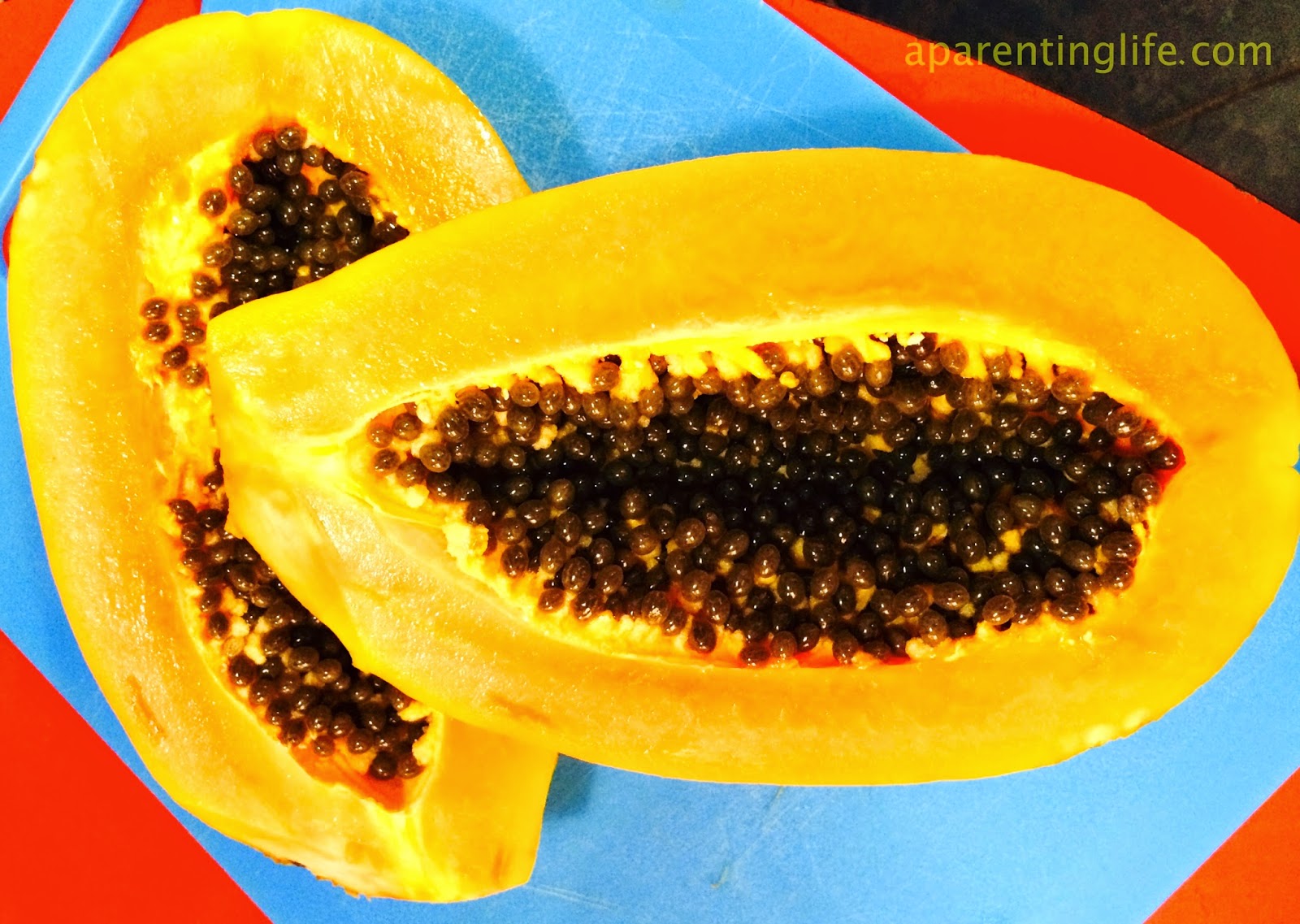 Even though I live in the tropics and have even had papayas grow in my backyard it is not something that we eat all that often. For some reason the girls are not the hugest fans. Which I think has something to do with the soft squishy texture of them.  And quite possibly the fact that I had never thought of actually making something with them. Up until now I had simply thought of pawpaw as a stand alone fruit you eat by itself.

Oh how little I knew.

Thankfully with the papayas came some wonderful recipe ideas. So wonderful that I set about trying to make them all and promptly declared the following day as pawpaw party day.

Now since then (the middle of May) and now life has been a non stop roller coaster of events which has sadly seen all things blogging take a back seat. Which means I suddenly find myself on the final day to enter without a post. And while I don’t think I came up with the most imaginative or creative recipe I still feel compelled to get something out purely and simply because I said I would.

One of said events that has taken place in the last month has been me packing up the house ready for #ouradventureofalifetime. Which means the recipes I used have been put…who knows where. So I am more than winging it right now.

My favourite one though was a prawn and pawpaw tortilla. Super easy and beyond yummy, though not very popular with the kid lets on account of the prawn factor. 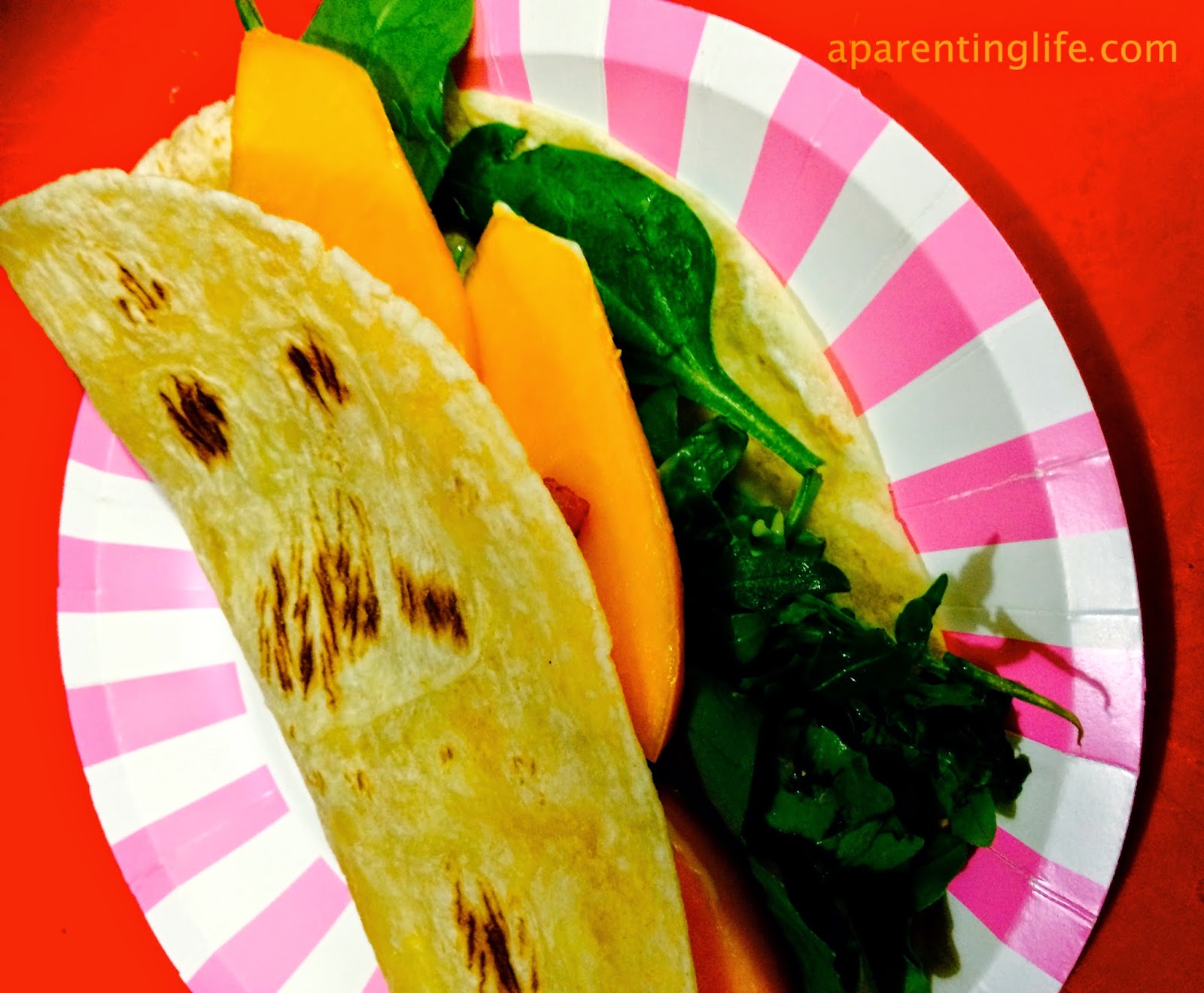 All I did was gently pan fry some prawns, about 3-4 per tortilla. To fry them I just put some butter and crushed up garlic in a pan on a low heat and added the prawns. It only takes a few minutes each side. I then put some thinly sliced papaya and rocket and spinach leaves on a warmed tortilla. Then added the prawns and drizzled over lemon mayonnaise. Which is essentially just ordinary mayonnaise with lemon juice squeezed into it. Yum, yum yum.

My next favourite dish was a breakfast/dessert. This one was the one the kids most liked as well. 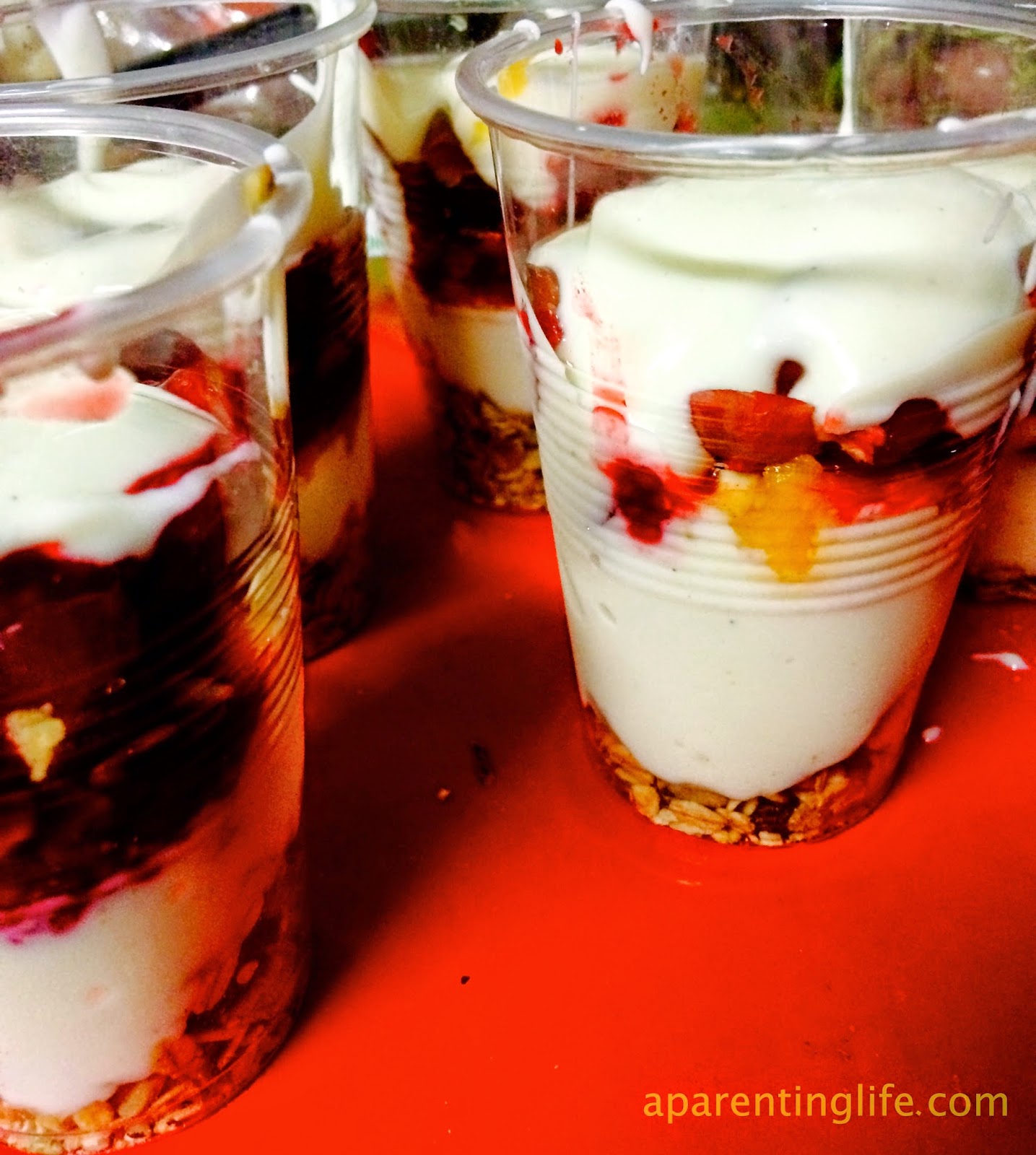 First up I boiled some (1 cup) of raspberries with some sugar and water. And here is where you discover what a terrible food blogger I am because for the life of me I cannot remember how much sugar and water I used and given my terrible lack of internet at the moment I can’t google it to find out. Essentially though I was just making raspberry syrup.

Once the raspberries were liquified and sugar all dissolved I put it aside to cool. Once it was cool I layered it in a cup with granola, diced pawpaw and vanilla yoghurt. Sprinkling some chocolate powder on top. Perfect for a healthy dessert or breakfast which makes it totally winning in my book.

Another of the recipe suggestions was a pancetta and papaya pizza. Which I thought would win the kids over hands down simply because it was pizza. Apparently I was wrong. 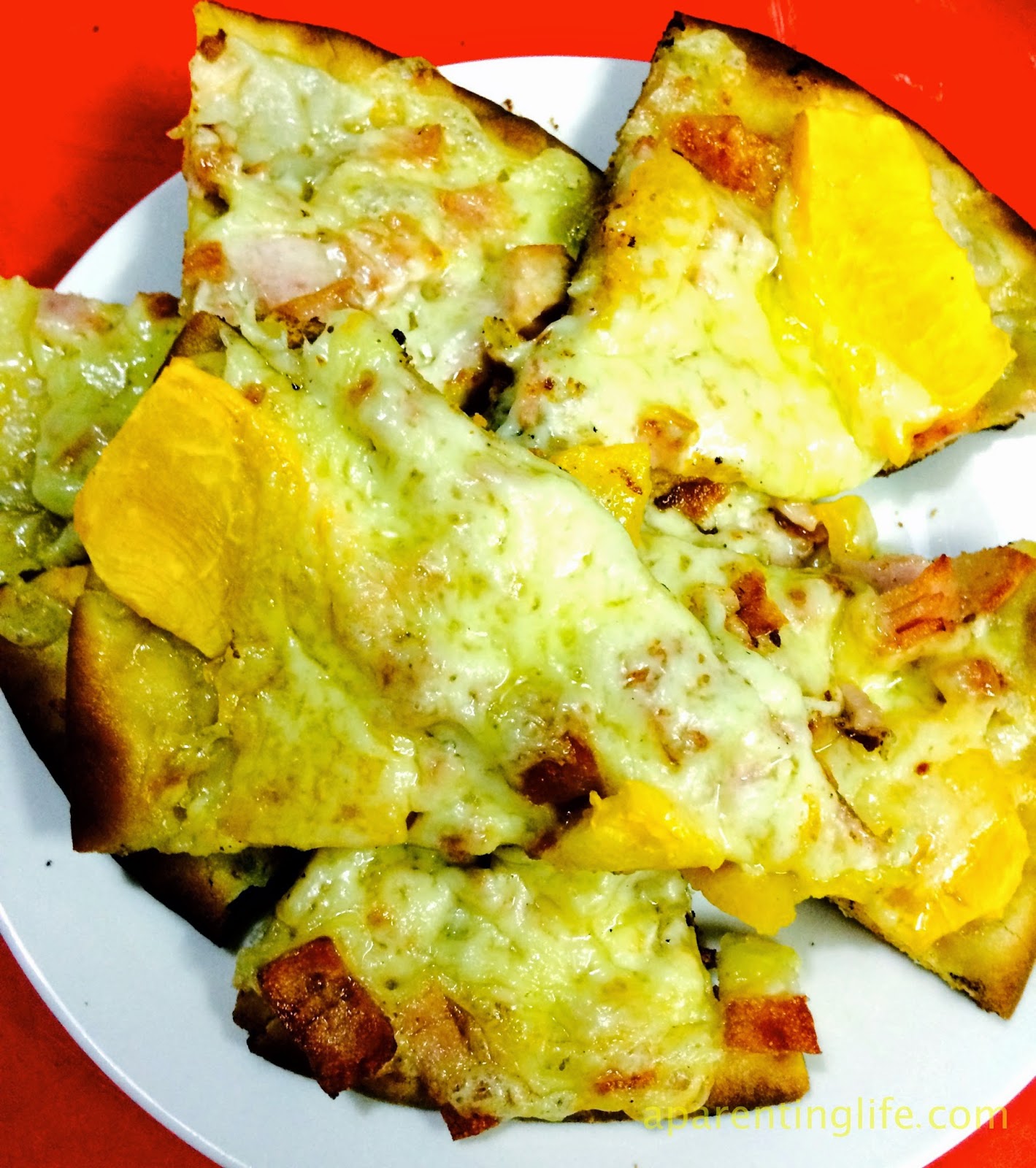 Though I must admit that the pizza I made was nothing at all like the recipe on account of me for getting to get the pancetta when I did the shopping. I also excluded the ricotta and rocket leaves because I just knew they would make it a no go zone for the kids I was cooking for.

So my pizza stared papaya slices, bacon and mozzarella with a BBQ sauce. Rather than a traditional pizza base I used the tortillas wraps as I love how they make for a crispy base.

The final recipe I created if you will was a pawpaw and rocket salad. 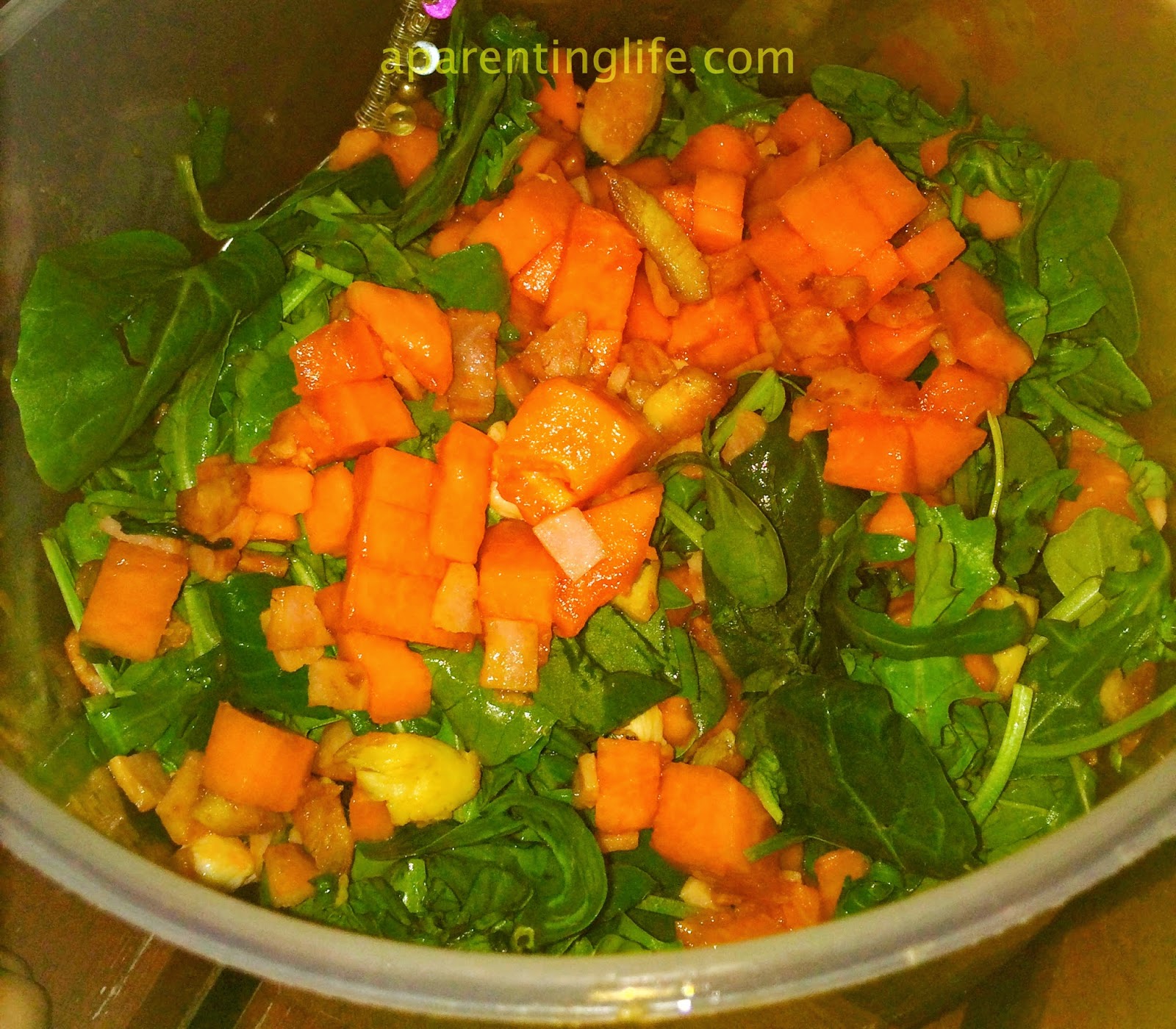 In this little beauty I just through together my favourite green leaves, (rocket and baby spinach), some diced papaya, fried bacon, pine nuts and some diced chicken. Instead of a dressing I just squeezed some lemon juice over the top. Again all kinds of delicious.

So there you have it. What I came up with for the Aussie Papaya Challenge.