Ten Minutes and an Ultimate Collection

A few weeks ago I received and email.  True story.  It was one from a media company and made me feel rather special to say the least.  In terms of interaction with such companies I am still somewhat of a virgin.  I have never really sought them out but such offers are always welcome.

Now before I go too much further I want you to rest assured that I would never sell my opinion.  Or rather I doubt there are any companies out there that would be willing to pay the required price for my opinion.  Rest assured if I am being told what to say about something then I would have made a tidy little profit out of the venture.  And when I say tidy little profit I mean a massive fat wad of money, hence why it will never happen.  Which means any thoughts or opinions I give about a product will always be my own.

Glad that's out of the way.  As a wanna be professional writer I know the importance of ethics and all that.  Now where was I?

That's right, all excited about some email that was probably sent out to fifty other newbie bloggers under the misguided impression that blogging will in fact one day make them rich and famous.

Naturally I responded swiftly to the email and hoped that just maybe I might get something cool to share with my readers.  Or failing that something cool just for me and the girls. 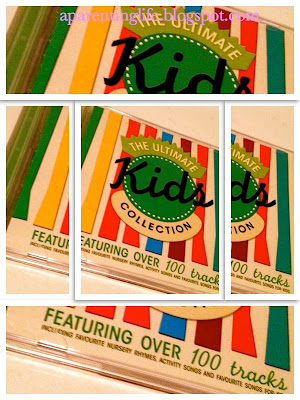 A three disk collection of favourite nursery rhymes, activity songs and kids songs.  Apparently there are over 100 tracks for your listening pleasure.  Or rather my listening pleasure.  There was a bit of a crack in the front cover so it seems wrong to send it on to someone else.  Plus there really are some great songs on there that I have not seen on CD for ages.

Brilliant songs like Hakuna Matata and Agadoo plus a whole heap of classic kid movie songs like Under the sea, I like to move it and You've got a friend in me.  Actually on disc three which is the Favourite Kids Songs CD I can't see a song that I don't want to listen to.  It is by far my favourite out of the them all.

The Favourite Nursery Rhyme CD does not actually do a great deal for me as I am not really a traditional kind of gal and it is chockers with traditional things like Baa Baa Black Sheep,  Pop Goes the Weasel and so forth.  It does make a wonderful change from some of the more commercialised things that are out for the little ones these days.

All in all it is not a bad CD.  I have no idea what it retails for or where you could even buy it from if you so wished. Possibly abcmusic.com.au as that is printed on back cover.  I am not even really sure if I was to write a review of it as in the email it said it was a thank you for wanting to be involved with the company.  Since there really were songs on there that I was excited to be in possession of I thought I would give it a bit of a mention though.

The Blogging Olympic challenge for today is to write a post in ten minutes and hit publish.  This may have taken a little more than ten minutes to write, but I am putting that down to the need to get breakfast for the the starving masses that are apparently unable to fend for themselves.  So there you have it a double whammy, a ten minute post and review all in one.  Actually make that a triple whammy because it is Tuesday and I have blogged.