Regulars readers will know that I just love blogging on a Tuesday,

I also have a love of buttons!

Some weeks, like when I have been chatting to mothers of Olympians I am super organised and have the post all scheduled to go before Tuesday even gets here.

Other weeks I wake up super early and get it written as the new day dawns before the ruckus of children begins.

Every now and then I struggle all day to get something up.

Rarely do I not find something to share but it has happened. Like last week. There was no blogging on Tuesday from me last week. Actually to tell you the truth blogging has been a bit tough for me of late.

I had decided to try and see if I could raise the bar a bit in terms of the standard of posts I put out. After the recent discovery of my interview skills I suddenly thought that maybe I could turn into one of those bloggers come journo types. I heard on the grapevine that journalists were concerned about the rise of bloggers or something like that and suddenly felt semi inspired to live out my once muchly dreamt of career path of journalism.

You know the thing that turned me off being a journalist? Well one of the things. The fact that you had to study to be one. You see after only having been exposed to the like of the NT News or the Daily Planet, I thought there was little to being a journalist. Lois Lane does make it all seem pretty straight forward.

Moving along though because clearly Superman is not coming to rescue me and nor am I about to make headlines as the mummy blogger who turned journalist and took on the world. At least not this week. Though I wouldn't mind being a blogger who wrote an awesome book that went on the best sellers list for weeks at a time.

But enough of my pipe dreams for now.  I need to work on the whole writing regularly still before I can expect to have any hope of publishers knocking my door down and offering bags of money for my words of wisdom.

For now though, it is Tuesday and I have blogged which always makes me happy.

#IBOT is the one linky where I know I will get lots of visits and beautiful comments which give me the encouragement to write just that little bit more. So a big thank you to the lovely #IBOT community. 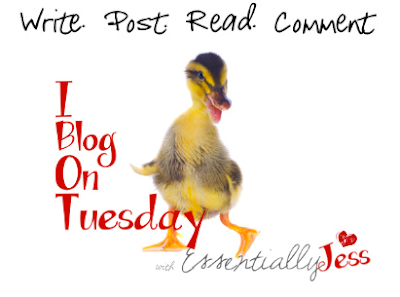