Staring into the screen she didn't know where to begin.  Her fingers hovering over the keys, trying to decipher which ones should be pressed in which order.  Pen and paper was so passe these days.

Any real writing that had to be done was always typed.  Mind you she had little choice.  Handwriting had always been too slow when it came to getting the words processed at the high speed that her brain would send words gushing out at.  She just couldn't write fast enough and it would turn out to be one big jumbled mess of nonsense.

At least typing allowed her fingers to move at a more acceptable speed, allowing for not such a jumbled mess to come out.She kept meaning to try some new voice to memo thing on her phone but by the time she remembered it and got it set up her train of thought was well and truly lost.

Everything always tended to come out in a humbled jumbled mess.  Past experience had taught her that the quicker she got get words cemented in a visual form the better.  The added benefit of typing meant she could quickly erase anything that was not quite right.  There was nothing more distracting than the messiness of scribbled out words on paper.  She shuddered at the mere thought.

Back in her younger years when she first realised her love, (or perhaps need) of writing there was no such thing as computers.  Well at least not home computers in the mass fashion of today.  She could still clearly remember the first computer that had come into the house.  It was apparently from the law courts and the memory had been wiped and the system rebooted.  Whatever that meant.

To her it was just funny looking miniature TV with a funny coloured screen.  She loved that it was for nothing other than typing out words.  A few years before hand she had been given an electric typewriter.  It was a step up from handwriting but at that stage her typing skills left a little to be desired.

As it turned out though, she had a bit of a knack for finding her way around this fang dangled machine.  Somehow she discovered that the internal memory had not been completely cleared.  For hours she would sit reading through the list of names that had once had the details of their divorce stored on there.

Sadly though this trip down memory lane wasn't exactly helping her get done what needed to be done.

She was supposed to be writing her father's eulogy.  Not that her father was actually dead yet, nor looking like it any day soon.  Sure he wasn't the fittest bill of health but he was not on death's door yet either.  Given that death was one of the few certainties in life though he had decided that he wanted to be prepared for the inevitable.  As such he had requested a copy of what his daughter thought she would say when the time had come.

While his exact words were "well you're the wannabe writer in the family, I guess we'll leave this one in your capable hands" she was sure he had meant to say "since you have such a lovely way with words I hope you can come up with something fitting to say" or at least words to that effect.  Though after thirty odd years of being his daughter she was fairly used to the way he spoke now.

It was just the way he was brought up.  So different to the way she was accustomed to.  Where his life was a pass the parcel from pillar to post, a was the norm for bastard children of his era, hers was one of love and stability that saw her parents under the same roof till the day one died.

That's not to say it had always been the most joyous of unions, but above all else her parents had always ensured that she and her brother had a loving home to grow up in.  Letting out a deep sigh she could hear her brother sharing his thoughts on the up coming pre funeral.  She doubted he would attend.  She wished that she could be so brave as to stand up and share how she felt about the whole matter.

Of course she would never really do such a thing though.  It wasn't in her nature.  Her thoughts on how her father handled his diagnosis were not relevant.  After all who was she to judge?

She was not the one who had just been told they had some rarer than rare form of leukemia that may or may not end your life.  Because that's how rare it is.  So rare they barely know more about it than some big long name.

Her brain hurt just trying to compute it all.  For now the screen could stay blank.  Picking up her empty glass she headed for a refill.  How she longed for this to purely be something easily fixed by a stiff drink.


This may or may not turn out to be a future best seller.
For now it is me just making sure I make the time to write, something, anything.
Joining in with all the other awesome bloggers who blog on a Tuesday
and then share the bloggy love via Diary of a SAHM

Also joining in with the lovely Penny who hosts 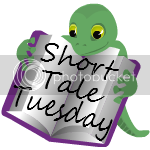