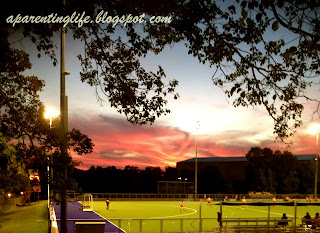 Sitting there watching the sunset she wished she was anywhere but there.  Sure the colours were some of the most amazing that she had ever seen, but right now they were the last thing on her mind.

Perhaps if she was on some deserted island with a cocktail in hand she would have been able to appreciate the beauty in the unusual mixture of colours that were decorating the skyline a bit more.  But she wasn't, so she couldn't.

She exhaled trying to let some of the worry leave her, but it didn't  Not knowing had always been a bit of a problem for her.  The waiting and wondering, it allowed for her mind to create all kinds of possibilities. Her mind was always so good at imagining the worst possible scenario, that she generally expected things to be ten times worse than what they actually were.

Her eyes scanned the field one more time just to make sure he hadn't snuck back out.  She knew of course he hadn't, but she was nothing if not hopeful.  Stretching her neck she tried to peer round the poles that obstructed her view of the playing bench.  He was still sitting there.  This eased her mind a little but not much.  At least it wasn't serious enough to be taken back to the change room for medical attention.  The fact that his shoes were off meant his was out for the rest of the game.

Which was what really peeved her the most in some ways.

She didn't mind giving up her Saturday evening to watch him play.  In fact it made her heart soar to see him out on the field.  His booming voice instructing his team mates where to stand and so forth.  She felt like a giddy teenager watching her sporting idol.  She loved watching him do something he loved so much.

What she didn't love though was sitting there watching him not play, while she worried about how  damaged he was.  To make it even worse his team wasn't even winning and didn't look like they were going to either.

She let out another sigh and checked her watch.  There was still another twenty minutes till half time.  It was going to be a long one.  Unless he was playing she really wasn't interested in watching just for the fun of it.

Her mind went back to worrying.

She hadn't seen the incident happen, though she would probably neglect to mention that to him.  The children had mistaken her for a climbing frame at that point and were blocking her view.  As they moved out the way and her eyes returned to the field all she could she was someone on the ground clutching their knee and everyone else crowding round.

Her heart skipped a beat and then made it's way up her throat as she tried to find him on the field.  Somehow she just seemed to know that he was the one on that had gone down.  As the players dispersed while the trainer and coach bent down to help him up her worst fears were realised.

Trying not to panic too much she tried to recall which knee he had previously damaged.  The skin coloured support brace he wore couldn't been seen from where she was.  The lump in her throat kept on growing.

Every inch of her being was concentrating on not getting carried away.   Over reacting and excessive (and often unnecessary) panic were two of her strongest characteristics.  Though the effect her worrying had on the children meant that she was getting better at remaining calm in their presence.  Or at least present an outwardly calm persona.

Watching him helped off the field while the crowd politely clapped, she found herself hoping that this time it was he who was over reacting.  Her fingers and toes were crossed in the hope this would all just be fixed with ice and a bit of rest.  The children took up so much of her patience she wasn't sure how she would cope if she had an immobile patient to tend to.

It's Friday so I am flogging my blogging With Some Grace