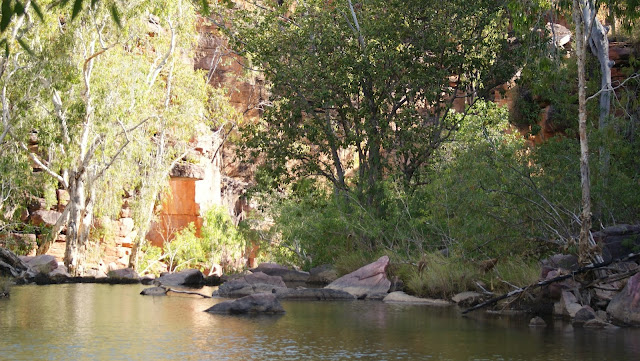 Climbing over the rocks between her and the water's edge proved to be a little trickier than Sally first anticipated. Between the heat of the day and her body trying to process the excess toxins from the night before Sally was suddenly a little uneasy on her feet.

Gingerly she placed her foot on the smooth rock, hoping that she would not slid right off. As flat as the rock may have been it was not exactly on the best angle for walking on. Before long though Sally had managed to safely negotiate her way into the water.

In fact there was no more discomfort in any shape or form. It was almost like the water had magical properties.

Laying on top of the water Sally idly floated on her back. The water was starting to chill her previously hot body. The sun on her stomach was a stark contrast to the muscles in her back that were beginning to contract due coolness in the water.

Swishing her hands below her buttocks in a loose figure eight to stay afloat Sally inhaled the fresh air till she could feel it reach the bottom of her lungs. There was something invigorating about bush air. Sally imagined all the little particles of oxygen invading her blood stream and giving new life to the alcohol damaged fibres within her.

Exhaling Sally pushed the air out of her newly filled lungs. Making sure there was not a drop in there she repeated the process a few more times. Spreading her arms and legs out like a starfish Sally moved them in and out in time with her breathing. Each time she inhaled she vislualised her body being filled with fresh new life. With each exhale she saw all the stresses, worries and burdens leaving. Giving an extra big puff at the end to ensure they were all blown away for good. As if it were all that easy.

Feeling slightly invigorated and a lot cooler than when she entered the water Sally was now beginning to feel a little pruney. Her wrinkled finger tips confirmed that she had probably obsorbed enough water for the time being. Flipping over to her stomach Sally headed back to the bank and her towel. Her head felt clear enough now to concentrate on her book.