Darwin - The Most Unique Capital City Ever

When I first started this blog it was because I had illusions of grandure. I was certain that this would be my first (and probably only) stepping stone to the world of being a big time writer. As such I made a point not to disclose too much personal information. Especially in regards to where I lived and the children.

A few years down the track I am still full of grand illusions but they have changed a little.

For example there will be many stepping stones for me to dance across as I try my hand at this writing gig. The chances of ever making it to the big time are somewhere between not bloody likely and not standing a chance. And all of that is ok. My need to write now is more about myself than signing a book contract, though I will happily sign one if you are publisher in need of soliciting a new (and rather awesome) author.

One of the other things that has changed is my desire to keep my location a classified secret. Reality has set in and chances are if you really wanted to come a stalk me in life not mentioning here is going to stop you. Plus where I live is unlike most places and it is about time I let you in on a few of the rather cool things that go on here. 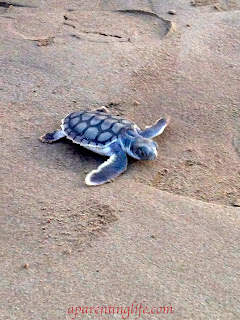 Turns out that Darwin, is the only capital city in the world, yes that's right the world, that has flat back turtles nest on their beaches. How amazing cool is that?

How did I discover that I hear you ask? Well read on.

Being the only capital city the world over that has turtles nest on it's beaches means that the local Parks and Wildlife Rangers are rather keen to share their turtle knowledge with members of the public. This means that every now and then when they discover a clutch of eggs has hatched they invite a bunch of special people to come down and watch these cute little critters make their way down to the water's edge.

And you guessed it, yesterday I was able to be one of those special people. Though before I get too carried away with the specialness of it all I should point out there were probably two hundred odd people out there with me. 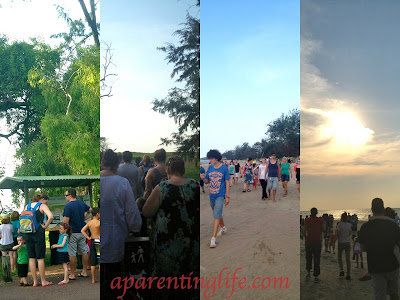 For twenty years now Territory Parks and Wildlife rangers have been coming down and sharing this wonderful experience with the public and helping baby turtles make it safely to the water. Previously the waiting list has been about two and a half years long. The groups were much smaller and probably offered a lot more to the individual but since not nearly enough people got to be a part of it they decided to change things a bit and I am so glad they did because this was one of the most wonderful things I have witnessed.

Now we didn't get to actually see the turtle nests or watch them come out of the sand because that happens at night on the high tide and just wouldn't be all that safe for lots of people with small children. Instead the rangers check the nests every day and when they see that the eggs have hatched they call up all who have expressed an interest to be involved. The rangers then remove the eggs from the nest and place them in a calico bag till late in the afternoon when everyone can meet down on the beach.

From there Ranger Ray gives a very informative turtle talk.

After the talk all present form a big line and the baby turtles are placed on the sand and head towards the water. All present then get to watch these gorgeous little creatures head towards the ocean and ensure they make it safe and sound. Did you know that only 1 in 2000 turtles actually makes it to be an adult? They really are not good odds.

If you are interested in finding out some more of what Ranger Ray spoke about there is a whole post about it. And if you come back on Wednesday there will be some more great photos.