Oh What a Day! 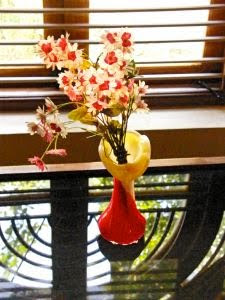 Today was one of those where all of a sudden, everything in the house must be cleaned, moved and just generally assessed. Anyone who has stepped foot inside my house lately will be able to tell you that it was well and truly over due.
Given the mammoth task it is not surprising to say that there is still plenty for me to finish tomorrow. It was one of those projects where every step led to another five things to do. The end result though is certainly well worth it all though.
The new layout not only feels more spacious but also easier to manage. We have removed a number of common dumping grounds. Hopefully this will curb the tendency to dump. Some members of the household have a terrible habit of just leaving things where they were last used. The concept of actually returning an item to it's 'home' or where it belongs is at times too great to be grasped.
But enough on the awesomeness of my homes new layout. There are so many other things I want to share in the post. Like the amazing dinner I threw together (without having to go to the shops) I just love it when dinner can be done without purchasing a single item. I have been so busy today that the greatest distance I have been from the house was to take the rubbish out. I must also say that this point greatly delights me. I find something very comforting to know that I have not had to venture outside my own little bubble.
So all in all things look like they are on the up. I am somewhat in control of the house, my writing has gradually increased and I am slowly becoming more active. My new Ion Energy bracelet thing seems to be doing just fine so far.
Photo credits can be found here

Email ThisBlogThis!Share to TwitterShare to FacebookShare to Pinterest
Labels: 2011, dreams, Growth, Inside me, photography