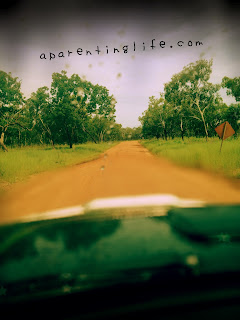 Turning off the highway and on to the dirt road Sally suddenly felt a little more human. The air around her seemed to change and she began to feel not so hung over. Perhaps even slightly alive.

Picking up a water bottle she thirstily guzzled the cold liquid within. The sensation of it traveling through her veins was not unlike that of the coffee earlier in the day.

Gently activating little buttons within her. Awaking her senses and allowing her to feel all that was around her.

Looking longingly at the wildness before her Sally couldn't wait to be surrounded by nothing but trees. Submersed in her own solitude, totally removed from the real world and all it entails.

Glancing in the rear view mirror there was nothing to be seen but a cloud of red dust. Her veins began to tingle again and she knew that heading out of town for the day was just what the doctor ordered. It was the perfect medicine to forget about constant pressure and stress that she felt at work.

Another fifteen minutes down the track and Sally found herself in a half made car park. Surprised to be there already she pulled the car up under the shade of a tree. Turning the ignition of her ears longed for the sound of silence.

Sally was blasted with a blaze of hot air as she opened the door to get out. Made worse by the cool air conditioning she was leaving behind. She briefly wondered if reading her book in the car with the air con running was a better option than hiking down to some creek or river that may or may not actually be swimmable.

And for a moment it was.

But then out of no where a cool breeze ran gently through the trees and the whispering of the leaves beckoned her into their shade.

Her heart was both glad and disappointed to see a designated path.

She longed for every example of someone else being there before her to be removed. It was easier that way to pretend that she was the only person in existence. To imagine that all she saw before her was there solely for her and her alone. As selfish and self centred as that was, it was still her hearts desire.

Still at least if there was a path she wouldn't have to worry so much about getting lost. Not that she ever worried about it per se, when one had walked as many bush tracks as Sally getting lost was not something you ever wanted to admit to. She did however have a tendency to walk to far at times.

Loving the bush as much as what she did was something Sally had grown up with. Her father was a bush man at heart as well. Growing up her strongest memories were of being out in the bush. Watching birds, hunting for food, enjoying the tranquility that came with swimming in billabongs.

As Sally began to make her way down the rocky path yet nicely shaded path she could feel the weight of the week leave her behind. While the pounding in her head was still there it had slowed and softened somewhat. She could feel each bang lessen with step.

A few deep breaths in and out and suddenly Sally was feeling more alive and relaxed since she didn't know when.