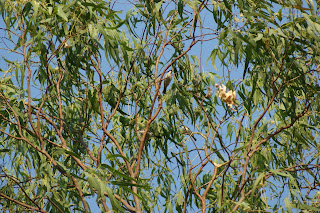 I have just come up with the most brilliant idea ever!!!

I am putting a self imposed word limit of 500 words on all of my posts. The Internet reader has a short attention span and studies have shown that much past 500 the attention has is lost.

The other big plus is that in theory this should mean more posts! For those times when I really feel the need for a long ramble I can split it in half and get twice as much.

The article which prompted this brilliant idea is called The Problem and can viewed right below this post.
The second part will follow shortly but I don't think it will be called The Solution as many may well expect. Stay tuned for further details or better yet subscribe to an RSS Feed and never miss an issue!

Today's photo is one of my first taken with my flash new toy. If you look hard enough you can see a bird. Hopefully it won't be long till I have the whole zoom thing worked out!