Snapshots of Us - Week 4

So I know that the whole idea of Snapshots of Us was so that I could make sure I had regular photos of us all but those who know me well will know that rarely do my plans actually go as intended. And this is no exception.

Luckily though it is my blog and I can change the rules as I please and see fit. Which means that Snapshots of Us is  no longer a purely photographic series. It will also serve as a way for me to jot down and remember some of the things I may other wise forget. Though I doubt there is little that I would actually forget this week.

To say it has been a big here for us in the real world is quite possibly an understatement.

Firstly I went back to official employment for the first time in over eight years. Just a casual position at the local video store but the money will be beyond handy.
Next I discovered I have a blood clot in my left basilic vein. Which sounds awful but since I wasn't rushed to hospital I am thinking is not so terrible. Or at least that is what I am hoping.
The following day I enrolled myself I a Bachelor of Professional Writing and Publication which is a bit exciting. I am hoping it is third time lucky in the degree stakes.
Then out of nowhere Zany gets a raging fever and starts vomiting. Three days later I see some suspicious spots under her arm. Mr Awesome is taking her to the doctors as we speak. Which would ordinarily fall on my shoulders however I have my first real shift and refused to call in sick. And yes it does appear as if Teapot will follow her big sister down the measles path. Though I am praying my fears are wrong.
In amongst it all I have been hit with insomnia. Which gave me plenty of time to whip this beauty out 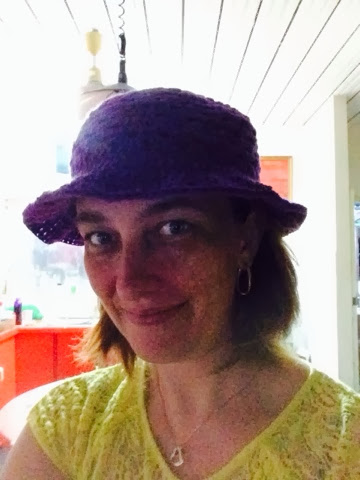 It is also the only photo I have of any of us this week.
Exhale.
What else?
Oh that's right one if the few people who I really deeply connect with in person will be leaving town before the end of the month. Cue devastation. Selfishly all I want to do is cry over the matter. I totally understand why it is happening and I know come six months time I would have been leaving her stranded as we go on our trip of a lifetime but it still leaves me so sad. If I were to be the type of person who had a best friend she woe undoubtably be my pick.
So there you have it. My week in a nutshell.
What's been going down with you?

Email ThisBlogThis!Share to TwitterShare to FacebookShare to Pinterest
Labels: 2014, Snapshots of Us