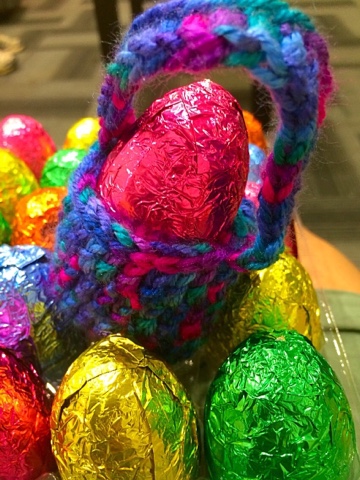 It was the Easter Sunday eve and all through the house not a creature was stirring not even a mouse.
Oh wait, wrong holiday.

Waves of exhaustion continued to sweep both through and over her body. Yet sleep still seemed to elude her. Or perhaps she just resisted the temptation to sleep? Either way, she was awake, a circumstance that did not appear to be changing anytime soon.

There was a part of her that longed so dearly to go and find comforting solace between the sheets of her bed, to rest her weary bones and shut down from the enfeeblement the consumed her, but it was just not to be. Her mind was filled with thoughts that were so busy jostling for attention that she feared it's neverending over analysing of ever little detail would never end. Ever.

Of course in reality there was never really a chance of that actually happening. The reality is that her mind was so good at distracting itself that it never did anything all the time. Sometimes she could get so distracted that things that needed doing would never actually get done. Often that which was started would not make it to being finished.

When I found myself in the early hours of Sunday morning actually managing to coherently string words together I was so incredibly excited that I just couldn't help but share my joy with my lovely followers on Facebook.

It is twenty to one on Easter Sunday morning. I should either be sleeping or hiding eggs. Instead I am writing. Like...
Posted by Rhianna Writes about A Parenting Life on Saturday, 26 March 2016

Only you know what?

By the time I had finished sharing that and returned to my words, they were gone.

Well the ones that I had actually managed to write weren't, I just suddenly had no new ones to add to them.

So so much sighing.

Anyway long story short my inspiration to write dwindled quicker than it had appeared. It has taken till now (Friday), nearly a week, for me to have once again found myself in a position to sit and write.

This makes me terribly sad.

I really do want to be a writer. I do.

Why I never make the time to sit and actually write though eludes me in the same way I can't find what it is to make me go and exercise.